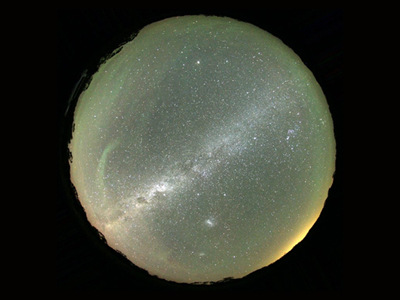 Signals from these radars propagate via regions of high electron density in the Earth’s atmosphere, known as the ionospheric E and F layers, which have peak densities at altitudes of around 110 km and 250 km respectively. Density irregularities in the atmosphere are common at these altitudes and can affect radar co-ordinate registration and signal strength.

DST monitors these density perturbations using a variety of instruments including highly sensitive photographic cameras which image the faint light resulting from some atmospheric chemical reactions known as airglow. Airglow is always present but is generally only visible at night. Different airglow emission wavelengths correspond to different chemical reactions at characteristic altitudes. For example, 557.7 nm (green) emission originates from oxygen at an altitude of around 96 km, 630.0 nm (red) emission is due to oxygen lying at altitudes between 200-300 km, 777.4 nm (infrared) emission emanates from oxygen at an altitude of approximately 350 km and 589.3 nm (yellow) emission is due to a sodium doublet seen at an altitude of 92 km. An increase in atmospheric density at a particular altitude leads to brighter airglow intensity in that region and a decrease to fainter airglow intensity. In this way, airglow can be used to map the density changes in the atmosphere that affect radar propagation.

DST operates two airglow experiments: TRACE and PortaTRACE. The Thermospheric Radar Correlation Experiment (TRACE) is a shipping container based airglow imager consisting of a Sentry camera with a filter wheel while PortaTRACE is composed of two single filter Sentinel cameras installed in a small purpose-built, insulated enclosure. The cameras work by photographing a series of night sky images through filters designed to transmit a narrow range of wavelengths. Four of these filters are designed so that the maximum transmission wavelength is also an airglow emission wavelength (557.7nm, 634.0 nm, 777.4 nm and 589.3 nm) and one is centred on 572.4 nm to photograph the sky at a wavelength where no airglow emission is known.

This page contains access to five years of DST airglow data from March 2012 to December 2016. Information about the available data and how to use it may be found in A Guide to the DST Airglow Database. To obtain raw data please contact Naar.Harjvffr@qfg.qrsrapr.tbi.nh or Naqerj.Pbby@qfg.qrsrapr.tbi.nh. Unihedron Sky Quality Meter (SQM) files have been added. For an explanation of the SQM data see the user manual.

A. Unewisse, A. Cool, and M. Cervera, "Observations of a Mesospheric bore over Edinburgh, Adelaide," presented at the Proceedings of the 14th Australian Space Science Conference, UNISA, Adelaide, 2015.

A. Unewisse and A. Cool, "Imagers for Ionospheric Airglow Observations," presented at the Proceedings of the 16th Australian Space Science Conference, RMIT, Melbourne, Australia, 2017.