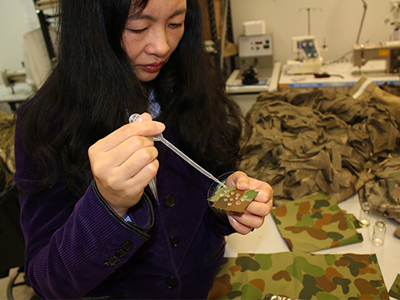 Could Australian soldiers soon be protected by various types of "fluid" body armour? Kenny Gregory discusses DST research that is set to improve the quality and safety of solider protection.

Surely that’s an oxymoron. Armour has to be solid to stop bullets or bomb fragments, right?

Actually, that is not entirely true.

Non-Newtonian thickening fluids have an amazing characteristic. They turn from a liquid into a solid the instant they’re hit by a sudden, shear force – such as being struck by a bullet or a piece of metal.

Instead of being heavy and rigid, these lightweight layers of life-saving liquid will comfortably conform to the shape of the soldier’s body shape.

For example, corn starch batter is a non-Newtonian fluid. Stir it slowly and it will remain in a liquid state. Stir rapidly or strike its surface suddenly and it stiffens up.

In contrast, no amount of external force will change the viscosity of more familiar Newtonian liquids, such as water or honey. Only changing their temperature can alter their state.

In this podcast you will learn something else even more startling about non-Newtonian thickening fluids. Something that scientist Doctor Jie Ding and colleagues from the Defence Science and Technology Group discovered while they were exploring the potential for using these remarkable fluids to develop new types of body armour.

A Defence Science Fellowship Award recipient, Doctor Ding also had an interest in the science behind energy storage. Specifically, the energy stored in batteries.

Doctor Ding wondered if these non-Newtonian fluids could be used as electrolytes. That’s the fluid that carries ions between the positive and negative terminals in a conventional lithium-ion battery.

If it could, she thought it just might solve a problem Aussie’s have encountered when they go on patrol carrying these batteries, which are used to power crucial devices like radios and GPS units.

However, on the negative side – if you’ll excuse the pun – they’re also highly flammable. In fact, they’ve been known to burst into flames – even explode – if hit hard enough. Friendly fire, indeed!

But, what if you could use a non-Newtonian liquid to carry ions inside these batteries? Would it turn solid when the casing was crushed or damaged? If so, would this prevent it from catching fire or exploding?

The quest to answer these questions led to a scientific Eureka moment for Doctor Ding and her colleagues.

Under the most accepted mechanism for shear thickening fluids, these nanoparticles repel each other, which meant they dispersed throughout the electrolyte. Doctor Ding  found that not only did this repelling property make the ions still flow readily when the electrolyte was in its liquid form, but it actually enhanced the liquid’s ability to carry ions.

And, when an external force was applied, the impact overcame the repelling force. Instead of repelling each other, the fused silica particles clumped together as the electrolyte turned from liquid to solid. The fluid’s high viscosity also meant the battery would not easily combust or explode.

The researchers discovered that as the force of the impact dissipated, the silica particles once again began to repel as the electrolyte revered to its normal liquid state.

After testing a variety of liquid electrolytes with various amounts of fumed silica, Doctor Ding hit on the optimum level. To her surprise, the formulation proved to be even more conductive than the electrolytes used in commercially available lithium-ion batteries.

The battery also stored more energy – particularly at high rates of charge and discharge. It was put through 47 charge-discharge cycles before being subjected to an impact. Not only did the electrolyte recover its liquid state quickly, but the battery continued to perform at pre-impact efficiency.

There were more surprises when the new battery underwent comparative crush tests. Batteries with no fumed silica additive succumbed at a force of 0.426 joules, while those whose electrolytes contained the nanoparticles survived an impact of 0.568 joules – a 33% higher resistance level.

Making the improved lithium-ion batteries is straightforward, too. According to Doctor Ding, the fabrication method is simple, easily scalable and no more expensive than current costs.

Of course, there will always be uses for batteries that can be made smaller, more durable, and more energy-efficient. As well as benefiting Australia’s frontline soldiers, they could reduce the weight and therefore increase the range of electric-powered and hybrid cars, which currently need large, robust battery casings to ensure they’re safe if damaged in an accident.

Doctor Ding's study on battery technology also delved into the properties of magnetorheological fluids, which change from a liquid to a solid state when a magnetic field is applied.

All in all, positive results on the back of some very powerful research.

Kenny Gregory: I look forwarded to seeing where this research takes our soldier protection.

To keep up-to-date with amazing developments like Doctor Ding’s, you can find out the latest in Australian defence science by following us @DefenceScience on Twitter, or download the DST App from Google Play or the App Store.