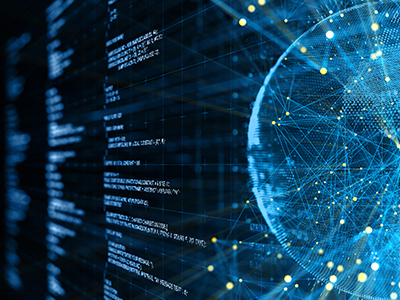 Alison Caldwell: Welcome to the Next Gen Tech Fund podcast series. I'm Alison Caldwell and I work for the Defence Science and Technology Group or DST.

Launched in March 2017, the Next Generation Technologies Fund is a ten year, $730 million program focusing on fundamental research and development of future game changing concepts for Defence.

One of the priority areas for the Next Gen Tech Fund as identified by the Defence White Paper in 2016 was Cyber. DST has formed a partnership with the CSIRO's Data61 team in the area of cyber research.

Gareth Parker is the Cyber Theme Lead with DST. I caught up with him recently.

Gareth Parker: So Defence's needs are very broad and growing, only in recent times we've seen the establishment of the Information Warfare Division within the Joint Capabilities Group that's been quite prominent in the media. At the moment that's fairly small and finding its way but there's a forecast for that to increase in size quite significantly over coming years. There are other interests in Defence of course with respect to cyber and our enterprise networks and strategic capabilities but military cyber is certainly something that is growing and growing non-linearly.

Alison Caldwell: What does the Data61 program entail?

Gareth Parker: So Data 61 is an organisation that's part of the CSIRO and it's that part of CSIRO that specialises in data analytics and sciences. They have an interest in cyber that's quite complimentary to ours as a defence organisation we're of course focussed on defence capability. Data 61 on the other hand has a focus that's more strongly on national benefit, growing industry and such like, generation of IP and fostering collaboration with universities and that national capability. They have some specific responsibilities set out in the Government's cyber security strategy, responsibilities around growing the number of PHDs in cyber, around international engagement in cyber capability and so it makes sense that we work together with them to leverage what is a common technological base to each organisation so their interest despite the fact that they have quite a different capability focus they have a very similar technological focus.

Alison Caldwell: You held a workshop in Adelaide in 2017 and you got some people together in this community is it a big community in Australia?

Gareth Parker: At the moment the community the cyber community is quite immature still and it's at the moment relatively fragmented each university involved in cyber has their own area of specialty and they're still working to come together to see how they can mutually add value greater than the sum of their parts. There are some initiatives which have been stood up around the country such as the recently established Cyber Security CRC but that only involves a small number of universities and again a fairly small part of the industry players. What we wanted to do though is to make sure we're more inclusive and reach out to all the universities in Australia and whatever industry potential partners there are out there who want to work with us and so that event was really an opportunity to bring together those parts of our community and really shaping that in a way around defence capability.

Alison Caldwell: Are you also working at the start-up level?

Gareth Parker: We'd like to work with start-ups as well. There's an opportunity through Defence's SBIRD Next Generation Technology initiative that could potentially fund start-ups who want to work with Defence and support our needs at the moment we're not yet working with any of those. What we are doing tough is we're working with some parts of the national technology community who we haven't yet previously worked with there are some companies out there that we met with for instance at that networking forum you mentioned back in last November where there is, it's quite promising what we might be able to do together potentially.

Alison Caldwell: What do you think the future of technology looks like in cyber?

Gareth Parker: That's a really interesting question and it's really reflected in those key areas we're investing in at the moment in the cyber NGT space, certainly as we look towards the long term it's quite clear there'll be a need to respond to cyber events in increasingly quick time our cyber capabilities if you like are increasingly complex and our adversaries are going to be outnumbering us quite significantly. I mean we're a small country and no matter who we might be up against in cyber space the chances are we'll be outnumbered what that really points to is increasing use of machine intelligence, artificial intelligence and autonomous automated processes.

That's a big part of where we're positioning ourselves in those areas of artificial intelligence that might augment what we do as humans but there are other areas as well some more fundamental areas I mean one of the principle things we need to do with our defence capability is to ensure there is a fundamental level of known trust that we can assume in parts of these systems. It's not going to be possible to assume that a whole military system is immune from cyber-attack but what we can do is at least identify parts of the system that we can achieve a certain degree of assurance in and then build an understanding of the overall level of trust that can be assumed of the whole system. That's one part. Then we've got areas like concepts and techniques around how military cyber operators can manage their infrastructure their capability in run time if you like in response to threats that are detected or anomalous behaviours that are identified what actions can be taken and how to do that in a way that ensures that the mission is able to be completed as planned.

So that's another interesting area and then the technology areas extend from those traditional areas that people would know and relate to such as computer security right through to securing the network itself. So that's the way traffic transits a network irrespective of whether within a military platform or between platforms or in fact between countries and the like right through to kind of wireless capabilities and the internet of things which like everywhere will affect the military capability as well.

There's genuinely life or death consequences around cyber capability in the military now this also applies to some critical infrastructure in the community and the like I mean we've just had an experience recently with the Royal Adelaide Hospital where the initial blame around a power failure was placed partly on a software glitch now that could just as readily have been a cyber-attack, it wasn't but it could have been. So there are examples in the broader community with life and death consequences but certainly in the military, that's very clearly the case you can't reboot your fighter aircraft when you're in mid-flight and something goes wrong with your cyber system, similarly if you're in the middle of a conflict and you're an adversary and you're on a ship and something goes wrong you really don't want to be compromising your ability to take the required remedial action that you need to in the event of some sort of cyber-attack so you need to be able to fight through these kind of these conditions and in fact that's a phrase that's been coined around the place, this fight through , but it's really all around assuring that mission and that's something that's a big part of what we're looking at within Defence because it's really is critical.

Alison Caldwell: How did you become what you are today, what did you study at university?

Gareth Parker: Like many people in cyber, cyber is only a relatively new thing, the phrase was coined probably in the mid-20th century and really meant little compared probably to what it does do today. As it stands in present times it's really only a modern kind of thing and originated around computer security some years ago but what it means is because it's a fairly new area of study of technology it means that many of us who are in these leadership positions started in something that wasn't an acknowledged cyber area. In my case my background is in electrical engineering I've been involved in communications and signal processing most of my career and of course as I mentioned cyber space is now increasingly supported and related to wireless capability I mean we all carry a mobile phone with us now which is a portable computer and so it kind of made sense that I would ultimately move more towards the cyber capability leadership.

Alison Caldwell: That was Gareth Parker the Theme Lead of the Cyber program at DST. I'm Alison Caldwell. We'll have another Next Gen Tech Fund podcast for you to listen to soon, so keep checking on @DefenceScience on Twitter, LinkedIn, Google Play or Apple iTunes. Thanks for listening.