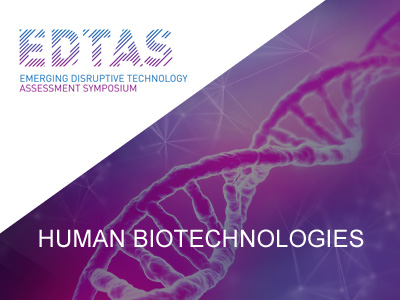 Imagine faster, cheaper gene editing, DNA robots, modified bacteria living in our bodies to fine tune our metabolism, a smart toilet which can diagnose disease and what do you know about your other brain, otherwise known as glia?

Welcome to the Next Generation Defence Technologies Podcast series. This podcast is about the latest advances in human biotechnologies. I’m Alison Caldwell.

Biotechnology harnesses cellular and biomolecular processes to develop medical treatments, technologies and products. In the world of Defence, the implications of biotechnology are enormous.

“So our job is to use science and technology to protect those who protect our way of life you know people are the core component of Defence systems and the health and performance of personnel is critical to mission success so it’s really vital that we understand the opportunities and the threats emerging from the rapidly expanding field of human biotechnology.”

This year human biotechnologies has been the subject of the Emerging Disruptive Technology Assessment Symposium or EDTAS series.

Dale Quinn: So I’m Dale Quinn and I’m responsible for leading the Technologies Foresighting team at DST, and my role here is to lead the coordination and organisation of the human biotechnologies EDTAS.

Alison Caldwell: How is it going? I think it’s going great we’ve had a really good selection of speakers and everyone’s really getting stuck into thinking about how human biotechnologies could apply to national technology in defence into the  future time frames and where things might go

This year’s first symposium was held at the Adelaide Zoo.

Co-hosted by the University of Adelaide, it brought together academics from across Australia at the top of their game in genetic sequencing, microbiology, molecular biology and brain research.

The challenge – imagine what’s possible with human biotechnologies in the year 2040.

First up Dr Laura Weyrich from the University of Adelaide.

Laura Weyrich: I study the microbiome so that’s the collection of all this bacteria, viruses, fungi that live in the human body and provide helpful beneficial functions for our physiology and our health it’s been called the lost organ it equates to 1.4 kilograms of your total bodyweight so it really is an organ almost

Alison Caldwell: What’s your idea of a really big moonshot?

Laura Weyrich: I think that we really need to deliver probiotics and prebiotics to specific places in the body and ensure they’re getting exactly where we want, swallowing a pill with those may help for example gut diseases but it may not be appropriate for things that go on in the mouth and so how do we ensure we get probiotics prebiotics in the right spot

Alison Caldwell: So one of your ideas is nanoparticle smart vectors to target areas how would that work?

Laura Weyrich: We would essentially envelope probiotics and prebiotics together which we’ve identified which ones they should be and then we deliver those to the particular cell types that we would find by using  binding to those particular cell types either using fat molecules or some sort of nucleic acid binding but we want to be able to deliver those to the right location in the human body

Alison Caldwell: And you believe that really every disease every condition inflammation everything has something to do with the microbiome

Laura Weyrich: I think so, greater than half your total cells in your body are microbial and so I think you have to think about them in every single thing that has to do with human physiology and the human being they shape the way we think they change how we feel the food we crave they change when our skin itches these things are not just something that’s going to go away we have to start thinking about them in every aspect of scientific research

Alison Caldwell:  And do you think they can be a solution to these problems?

Laura Weyrich:  Yeah I absolutely think so I think this is the solution of the future the microbiome is malleable it’s changeable so we can alter human physiology we can alter human health by not changing the human itself just changing its microorganisms this is going to be an amazing solution for future diseases

Ewa Goldys: I am Ewa Goldys from the University of New South Wales.

Alison Caldwell: Ewa can you tell me please one of your ideas for possibilities and implications of human biotechnologies in 2040 was the brain chip?

Ewa Goldys: Yes that’s right I think there is great scope to bring together chemistry technologies, material technologies, and also semiconductor device technologies already existing in a small package that would be implanted now this was actually stimulated by the idea of smart watches, smart watches we have them we wear them we love them they monitor physiological activity but only some aspects of it and there is a whole number of aspects that are completely unexplored due to the shortage of chemical sensors so our group is working on making this chemical sensing interface work and probe a number of analysis of key relevance for example human health

Alison Caldwell: So is that your crazy moonshot idea?

Ewa Goldys: I wouldn’t call it a crazy moonshot I think it’s a crazy moonshot perhaps for humanity to have your physiology monitored and probed on a continuing basis for science that’s a great challenge so as a Professor of Biomechanical engineering it is my job to point to my students and staff where the challenges are and this is a challenge that we actually are able to address and the rest probably would be done by big partnerships company partnerships because that technology is needed by everybody it will need to become ubiquitous very much like a smart watch.

Elizabeth Pharo: I am working on developing a lung on a chip model for looking at respiratory viruses and I work at CSIRO

Elizabeth Pharo:  It is but some of the technology is already out there to do these types of things and investigate respiratory viruses which is exciting.

Alison Caldwell How would it work would you put lung tissue on a chip?

Elizabeth Pharo: So basically we can isolate cells from the human lung and we can expose them to respiratory viruses and see what the host pathogen response is so we can look at cytokines chemokines various immune factors that are secreted to see how the human is actually responding and we can also use this type of cell culture system to test various antiviral drugs

Alison Caldwell: If that’s happening now what can you see happening in 30 years

Elizabeth Pharo: What I would like to see in 30 years time is actually the development of a device that we could use to monitor the air we breathe so we can check and see what viruses we might be exposed to say for example we were exposed to something like influenza we would have a device read out that would say you’ve been exposed to influenza you should go to the doctor and get antiviral treatment or you’ve been exposed to SARS or MERS you need to go to the doctor now  and it would be great if we could tell whether it’s a bacterial pathogen or a viral pathogen so that would make it much easier for doctors and the healthcare system

Ashley Connolly: I develop and use nano biotechnology to develop DNA nano machines.

Alison Caldwell: One of the ideas you have which you say is already happening is DNA robots?

Ashley Connolly:  Yeah you can basically design a DNA robot and have it walk along a DNA track or across a DNA tile – it does walk along and take steps powered by other DNA molecules so everytime, it can be initiated by a single DNA molecule and it can walk autonomously across the DNA track or it can be powered sequentially by different DNA molecules and it can stop change direction and go backwards as well. They are using them currently to obviously walk and to carry in some cases particles, they’ve carried gold particles with them and they’ve also used these robots to sort different molecules as well in the same way as a postman might deliver your letters they use these robots to deliver different compounds to different regions of a DNA chip and they can also use them to synthesise different molecules as well.

Alison Caldwell :So that’s happening now, what can you see happening in 2040?

Ashley Connolly: It doesn’t take too much imagination I don’t think to see that well actually they can already synthesize DNA shapes using long stretches of DNA that are stapled in to particular conflagrations, three dimensional confirmations so you can for example generate a DNA sphere that’s got, the surface can be crawling with different DNA robots and these robots will then be used to capture different molecules and if you’ve got an immune response then or circulating nucleic acids in your blood might then fuel the robot to walk the captured molecules inside the sphere to take them out of harms way

That was Dr Ashley Connolly from Flinders University. Before him you heard from CSIRO’s Dr Elizabeth Pharo and Professor Ewa Goldys from the University of New South Wales.

The ideas formulated and discussed in the Human Biotechnologies EDTAS series will help determine future research programs at DST.

Dale Quinn: What we do is we take it from here and we start to think about how some of the technologies and the concepts that everyone’s coming up with here can start to apply in the defence and national security space such as develop some concepts of use and then from that work out where some of the future research directions might be.

I’m Alison Caldwell. We’ll have another Next Generation Defence Technologies podcast for you to listen to soon, so keep checking on @DefenceScience on Twitter, LinkedIn, Google Play or Apple iTunes. Thanks for listening.