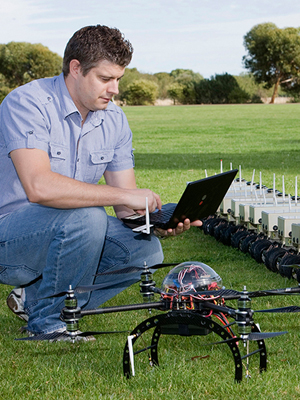 OPAL is a self-healing communications network concept using autonomous mobile nodes that exchange with neighbouring nodes the status of the network’s health, and adjust their positions to ensure communications on the battlefield are not disrupted.

DST Group researcher Peyam Pourbeik says OPAL is a framework and a philosophy for autonomous networking. “It’s a way of approaching how to make a network survivable, based on distributed software agent technology. In an OPAL network, each ‘agent’ or node is independent of the others, there are no masters.” This lack of hierarchy is what makes the network survivable; if something happens to some nodes, others can still perform" says Paul.

“So, decentralised nodes are the key concepts,” says team member Ping Hui. “Basically, we don’t assume any single node has full knowledge of the network status. We also don’t assume network status messages are completely accurate. When we took away these basic assumptions we found that the way we tackled network challenges was very different to typical network management approaches.”

Traditionally, most networking algorithms, whether decentralised or centralised, consist of nodes that receive status messages and act on that data assuming it is correct. OPAL takes that assumption away; each agent needs to make its own assessment of the network status.

“If you take that complete trust away and allow agents to be suspicious, what will happen?” asks researcher Peter George. “OPAL has a whole raft of assumptions and protocols based on this premise. Conceptually, an OPAL network is less complicated, but when one has to implement it, there are plenty of complications.”

Marek Kwiatkowski, who heads up DST's Survivable Networks Group, says that for Defence, OPAL is about survivable tactical communications during a mission. “How do we make it really survivable in a contested and volatile environment? In such environs it is very easy to lose connectivity. OPAL directs the human and vehicle nodes to locations that improve or re-establish connectivity. If autonomous vehicles are part of the mix, OPAL controls and positions them in the best places to support connectivity.”

“The network autonomously fixes itself,” adds Pourbeik. “The job of OPAL is not to get rid of a problem, such as a jammer, but to work around the problem.”

OPAL is a scalable concept that covers a large number of tactical nodes and provides links back to the operational headquarters. With the growth in popularity of unmanned air vehicles Marek Kwiatkowski can envision (Unmanned Aerial Vehicle) UAV swarms combining with static and mobile ground vehicles and humans carrying radios, each hosting an OPAL agent.

Such an ‘intelligent and autonomous’ network would need little human input, usually restricted to high level goals set for the mission by the commander. There are plans to introduce other criteria into the OPAL agent algorithms to support other network requirements, such as maximising data capacity and minimising power requirements.

“There’s a limit to how far a node can see and pass information. This is one of the advantages of OPAL. If something happens locally (e.g., sudden loss of connectivity) it will be fixed locally. That’s why decentralisation is so important,” says Pourbeik, describing a key OPAL concept.

“We call it the node’s ‘horizon’,” says Ping Hui. “A node might know a fair bit about the network in its neighbourhood, but will never know the complete situation. The further out, the less a node knows. For example, if a node senses (without knowing the full details) that the network situation in the north east direction is worse than in the immediate neighbourhood, then it heads in that direction. As it gets closer it will have a better appreciation of how to fix the situation.”

OPAL is still experimental, with the team conducting future trials in collaboration with the US Air Force (USAF). The USAF has identified OPAL as relevant to the US Joint Airborne Layer Network (JALN) program. Eventually the team hopes to inject OPAL functionality into a local Australian Defence Force (ADF) trial, to begin introducing the concept to Defence users.