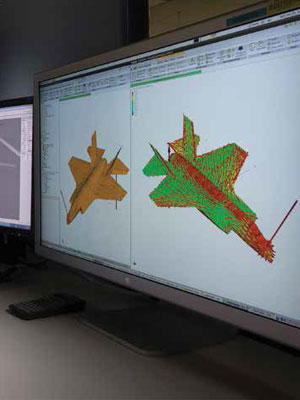 DST has a well-established team and facilities for electromagnetic effects investigations, which have been applied extensively in support of several Australian Defence Force (ADF) aircraft over the past two decades.

The knowledge gained has been used to solve potential problems with electronics system design, installation and modification.

DST's work on the F-35 Joint Strike Fighter (JSF) has involved the development of novel computer modelling that enables the impact of electromagnetic effects on electronic systems to be studied in a very cost-effective way. This modelling tool assists with airworthiness work being done to bring the aircraft into service and with through-life support.

To verify and fine-tune the computer model, DST required data of real-world electromagnetic exposures experienced by the aircraft. This was obtained through experiments using a purpose-built full-scale model of the F-35 aircraft, named 'Iron Bird' by the researchers.

In collaboration with the United States JSF Project Office, DST conducts research and investigations into the verification of the Electromagnetic Compatibility (EMC) of the F-35 aircraft to both man-made and natural radio frequency (RF) sources in the operational environment.

This work is providing a means to tackle the electromagnetic integration challenges of a fifth generation aircraft during both the system development and through-life phases of the program and is directly supporting the ADF and its coalition partners.