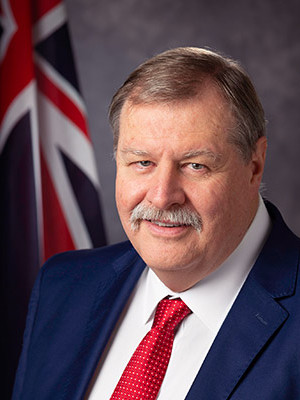 Chief of the Cyber and Electronic Warfare Division.

Dr Dale A Lambert PSM FTSE is the Chief of Cyber and Electronic Warfare Division in the Defence Science and Technology Group within the Australian Department of Defence in Adelaide. The division is responsible for all Cyber, Communications, and Electronic Warfare Defence research and development. He was previously the acting Chief of National Security and Intelligence, Surveillance and Reconnaissance Division and served as the Director General of Science Strategy and Policy for Defence Science and Technology in Canberra. Prior to that Dale was the Research Leader of Intelligence Analytics.

During his 30-year career in Defence science, he has been a visionary leader in driving Artificial Intelligence and automated analysis capabilities. Dr Lambert is a world-leading scientist in High-Level Information Fusion, the process in which a machine automatically combines multiple signal, image and text data sources to automatically comprehend current events and automatically predict future events. His in-depth contribution to Information Fusion has been extensive and innovative, with significant impact for Defence capability and national security. He was contracted from Australian Defence to Swedish industry for four years to design and implement an Artificial Intelligence system for Sweden’s airborne defence. The final Swedish system was subsequently on-sold to several nations in Europe, Asia and South America. He has successfully led research programs and made innovative contributions with his conceptual framework for High-Level Fusion processes and is credited with the design of the Consensus Artificial Intelligence architecture, one of the world's most comprehensive Artificial Intelligence frameworks. Consensus allows a user to speak in English with animated characters, each of which is connected to an automated psychology that manages that character’s thoughts, intent, beliefs, actions and emotional responses. Consensus has been foundational to a collaborative research program supporting a $100M United States initiative.

Dr Lambert recently completed two years as Chair of the Executive Chairs of The Technical Cooperation Program, the largest cooperation on defence science and technology between Australia, Canada, New Zealand, the United Kingdom and the United States. In this role he had administrative oversight of science and technology programs across these five nations covering: aerospace systems; maritime systems; land systems; weapons systems; materials; electronic warfare; human performance; intelligence surveillance and reconnaissance; and command, control, communications, cyber and information. Prior to that, he was the Executive Chair of the Command, Control, Communications, Cyber and Information Group within the five-nation program, and prior to that was Chair of the five-nation Technical Panel on Information Fusion, during which he received an international TTCP Achievement Award for the panel’s first book.

Dr Lambert is an internationally sought-after journal reviewer, speaker, panelist, award committee member and has over 70 publications. His co-authored and co-edited Information Fusion book has been used in international conference tutorials in Singapore, Turkey, Spain, the USA and Germany, and was subsequently translated into Chinese and published in China by the Chinese National Defense Industry Press. He has been a postgraduate supervisor for: The University of Adelaide; The University of South Australia; The Centre for Sensor, Signal and Information Processing; Chalmers University in Göteborg, Sweden; and The University of Melbourne.

The Institute of Electrical and Electronics Engineers (IEEE), the world’s largest technical professional organisation, presented Dr Lambert with the IEEE Harry Rowe Mimno Award at a ceremony in Washington DC in 2015 for “excellence in technical communication”. He was awarded the Public Service Medal by the Governor General of Australia in the 2020 Australia Day Honours List for “outstanding public service in the use of artificial intelligence in surveillance and reconnaissance, command and control, intelligence and autonomous platforms”. In 2021 he was elected as a Fellow of the prestigious Australian Academy of Technology and Engineering, a learned academy that helps Australians understand and use technology to solve complex problems.