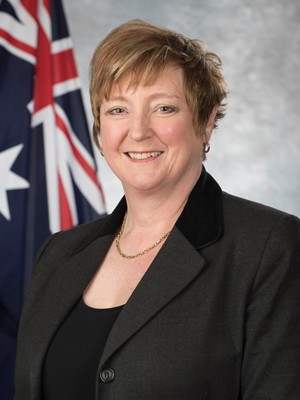 Lynn Booth has a B.A. in Physics and a D.Phil. in Astrophysics from the University of Oxford.

Prior to joining DST Dr Booth worked for five years for the UK Ministry of Defence at the Propellants, Explosives and Rocket Motor Establishment and the Royal Armaments Research and Development Establishment, modelling the properties of rocket exhaust plumes.

She joined DST in 1989 and worked in DST laboratories in both Adelaide and Sydney, where her work focused on submarine and anti-submarine warfare operations research. She spent two years seconded to the Directorate of Naval Warfare at Maritime Headquarters as their first Staff Officer (Science).

Dr Booth moved to Canberra in October 2001 as Director Strategic Analysis Policy in DST's Science Policy Division. Given the timing much of her time was devoted to considering how Australia's S&T community might better support Australia's counter-terrorism community.

From 2003 – 2006 she was seconded into the Department of the Prime Minister and Cabinet as Head of the Science, Engineering and Technology Unit, coordinating research programs to support whole of government national security requirements.

She returned to DST Headquarters in 2006 to manage DST Strategy and Policy and Strategic Reform. She contributed to the 2009 Defence White Paper through leadership of the Science & Technology Companion Review.

Dr Booth was appointed Chief of Joint and Operations Analysis Division in 2017.