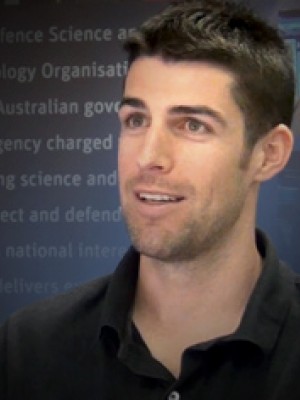 Since 2010 he has researched and evaluated ballistic armour technologies for Army vehicles.

“I worked for seven years in civilian space engineering in Germany and the United States on armour systems for spacecraft. So when I started looking for jobs to come back to Australia, there weren’t many that required that sort of experience. But ballistic protection of vehicles is pretty close to what I was doing. It was a nice bridge to where I am now.”

“I specialise in ballistics: everything from theory related penetration mechanics, to designing armour systems and testing and evaluating them. The bottom line is to get the top performance for the lowest weight. The highest amount of protection.” he says.

“My group also does a lot of blast work which is increasingly important. Last year we did a lot of work testing vehicles against blast, together with improving the associated test standards”

"The bottom line is to get the top performance for the lowest weight."

“We generally use coupon targets at ranges for ballistics. For explosive trials we can also conduct sub-structure trials, for example using different steel plates to examine how they perform under an explosive load. But the groundbreaking stuff was in live-fire test standards last year – we used I think about eight or nine vehicles and got some really informative results.”

“In a few months we’re doing some trials on vehicles to look at their survivability, checking parts of the vehicle that can be optimised and modified to improve their performance.”

He will continue to conduct numerical simulations of ballistics, using high-powered computer programs – the software is specialised for shockwave related finite element analysis of explosive or ballistic impact.

“The impacts (at trials) are so fast that in-depth analysis of the result can be difficult, other than metallographic analysis on the failed structure. But it’s hard to see what’s actually happening during the bullet penetrating the armour, even with high-speed cameras. So we do it with simulation codes to attempt to understand the mechanics, where the energy is going, and then use that to analyse armoured structures.”

He’s joking and quickly confesses to being a sport addict, ‘because most of my work is research and long-term – it’s a lot of maths and pretty complex science. I think you’d completely lose if that’s all you did, if that’s all you talked about.”

“It’s nice to be able to completely switch off.”