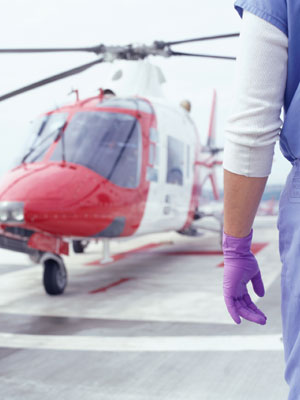 In 1983, Defence scientists and engineers began development of the Aeromed Retrieval Unit, a medical unit designed for transporting premature and sick babies from regional areas to hospital by air.

The work began following a request from Adelaide’s Queen Victoria Maternity Hospital. The hospital already used a neonatal retrieval unit for evacuation of premature and sick babies from regional areas. On occasions, the Royal Australian Air Force (RAAF) had assisted in many of these retrievals by providing transport for the unit, doctor and nurse in an Orion aircraft. South Australia was the only state in which Orions were used in retrieval operations, but the Queen Victoria Maternity Hospital unit then in use did not conform to RAAF airworthiness requirements.

In collaboration with hospital staff, DSTundertook the task of re-designing the neonatal retrieval unit as a community service exercise. In 1984, a trial unit known as the Aeromed Retrieval Unit, was handed over to Dr Ross Haslam, Director of Neonatal Intensive Care at Queen Victoria Maternity Hospital.

The unit was constructed of a high strength, low weight alloy, and was specifically designed to meet RAAF and Department of Aviation Airworthiness Regulations. Aeromed also had other advantages over previous units available to the hospital – it was smaller, more robust, easily manoeuvred and transported, and contained its own life support system.

Aeromed was designed for installation in various aircraft: in Piper Navajo Chieftain and Seneca aircraft types, in the Bell 206 L-1 Longranger South Australian State Rescue Helicopter, and the RAAF Lockheed P3C Orion. Electrical power for the heater and ventilator modules within the incubator was drawn from 12 or 28 V DC, 240 V AC or from the 12 V battery contained in the Aeromed. As well, all medical equipment incorporated into the unit, including the incubator, was commercially proven equipment.

A second prototype unit manufactured at DSTO (now DST Group) was displayed at the Paris Air Show in 1985. A second unit was delivered to the Queen Victoria Maternity Hospital in 1986.