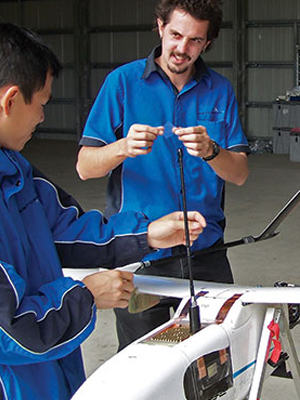 These types of radios are preferred by highly mobile forces because they are small and light, but their range is generally limited to line-of-sight distances – tens of kilometres – and often a lot less.

One way to increase their range is with a ultra-high frequency (UHF) satellite communications link. However, the available capacity of this capability can be quite restricted given the high demands frequently placed on it.

The solution proposed by DST was to make available another kind of overhead UHF link, lofted by high-altitude balloons and unmanned aerial vehicles (UAVs).

To this end, a UHF transponder payload for balloon flight was developed and field tests were carried out at the Woomera Test Range, in South Australia. These trials established that a range of up to 500 kilometres was attainable with handheld UHF radios via this means.

The technology was then adapted for deployment on unmanned aircraft, renamed the Airborne UHF Transponder for Radio relaY (AUTRY).

In 2011, AUTRY was deployed on a Heron UAV in Afghanistan and was noted for the capability enhancement it provided to Australian forces. The AUTRY transponder technology was commercialized under collaboration with RF Industries for marketing and further development.