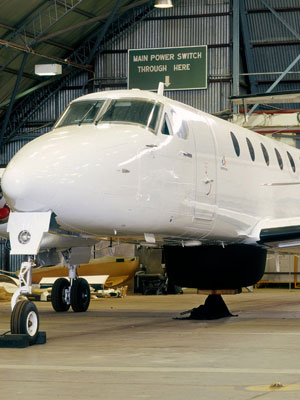 Synthetic Aperture Radar is advanced technology that allows a radar system with a conventional antenna to collect photo-like imagery at more than 500 times the resolution of normal radars – day or night and in all weathers.

Project AuSAR began in 1989, with a concept proposed by Defence scientist Dennis Longstaff and initial leadership from David Heilbronn. The project began with the aim of building a Synthetic Aperture Radar over the space of only three years. At the urging of Dr Don Sinnott, DSTO (now DST Group) then undertook further development, concentrating on the total system, in addition to building the radar.

The primary role of AuSAR was for defence mapping and surveying. By 1992, AuSAR was in an advanced state of design. The first AuSAR image, of the South Australian town of Balaclava, was captured in 1993 on the system’s inaugural flight.

In 1994, the project name of AuSAR was changed to ‘Ingara’, an Aboriginal word for ‘long way’. An air-to-ground data link and a data exploitation ground station were developed. The data link was the first air-to-ground data-link in Australia to have such a high data/imagery rate. The system was used for the first time in a military exercise in 1994.

The year 1995 saw the first integration of the data link and ground station. For the first time, an Ingara team of twenty were able to see in near real-time what was happening up to 250 km away from their base in Darwin — a significant milestone. A systematic development and testing phase followed.

Many lessons were learnt through the Ingara multi-mode radar project and the development of its maritime and littoral surveillance. The experience of the Ingara team was critical in convincing the US to undertake the Global Hawk project with Australia.

Scientists and engineers from DST played an integral part in adding maritime surveillance and dynamic control capability to the Global Hawk system and systematically tested the deployed system against various intelligence, surveillance and reconnaissance (ISR) scenarios. The system was successfully proven in the Gulf War where tactical intelligence was collected at night and through thick oil smoke.

The Ingara system is now part of the ISR Test Bed to assess and evaluate multi-sensor ISR issues, and is the only system of its kind in Australia that can collect fully polarimetric radar data.