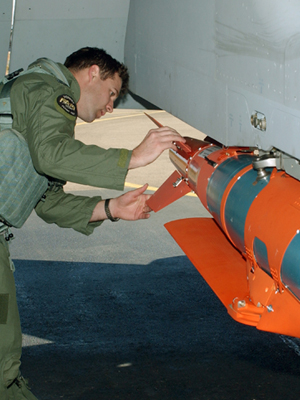 The JDAM-ER began at the Weapons Systems Research Laboratory (WSRL) in the 1970s, stemming from a Royal Australian Air Force (RAAF) research request into the conceptual development of glide bombs.

Early designs for low-cost strap-on wingkits and tail control modules for a standard MK-82 round led to two concept demonstrators. The first, the Glide Test Vehicle (GTV), was designed in the early 1980s and was successfully tested in four flight trials at Woomera in 1988-89. The success of the GTV program led to the second improved-design demonstrator, Kerkanya, at the Guided Weapons Division (GWD).

From 1990, the Kerkanya project was one of the largest work programs at GWD and progressed from preliminary design to flight test in under two years. In 1991 a Ballistic Test Vehicle (BTV) was released and flew unguided over the Southern Ocean. Guided trials were planned for Woomera in 1992 but the program was cancelled due to funding cuts.

By the late 1990s, industry had become interested in glide bomb technology. In the first Gulf War, Coalition forces had discovered that conventional seeker performance was affected by environmental factors like dust, sand and smoke. As a direct result, Boeing had begun to develop a guided store using GPS navigation, the Joint Direct Attack Munition (JDAM). An opportunity was identified to marry the DST wingkit technology to the emergent JDAM to create the JDAM-ER.

A Capability Technology Demonstrator (CTD) program was raised in 2001 under Project AIR 5425 to demonstrate that the DST wingkit could extend the range of the 500lb class GBU-38 JDAM weapon. Extensive tests were conducted in the DST Transonic Wind Tunnel (TWT) to provide aerodynamic data for modelling and simulation, autopilot design and aircraft-stores compatibility assurance. The resultant JDAM-ER was tested at Woomera in 2006 and 2008 and the decision was made to transition the successfully demonstrated technology to production.

In 2009, Project JP3027 was raised by the former Defence Materiel Organisation (DMO), now Capability Acquisition and Sustainment Group (CASG)  with the aim of adapting the technology for production, conducting final certification of the JDAM-ER on the F/A-18A/B and acquiring a number of wingkits. DST provided specialist scientific and technical (S&T) advice to DMO through the Project Science and Technology Adviser (PSTA) role. Extensive TWT testing and Computational Fluid Dynamic (CFD) modelling provided vital aerodynamic data for further autopilot design by Boeing, and carriage and release clearances by the Aerospace Operational Support Group (AOSG).

Successful certification flight trials at Woomera in 2013 signaled the final steps towards commercialisation. The addition of the DST wingkit to the JDAM represents a significant improvement in capability; by greatly enhancing the range of the standard JDAM it will allow the RAAF to engage their targets from beyond the range of enemy air defences. The JDAM-ER entered service in 2015.