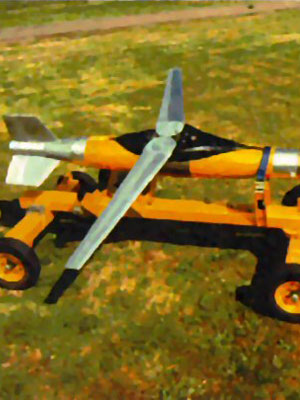 In the late 1970s, Defence scientists had the idea for a glide bomb that would use an energy management algorithm to maximise its glide range.

Kerkanya was essentially a set of glider wings and a tail control system which could be strapped on to “dumb” bombs, enormously increasing their range and accuracy. When dropped from an aircraft at high altitude and sub-sonic speed, the folding wings deployed and three servo-controlled tail fins guided the vehicle along a pre-programmed flight path under control of the digital auto-pilot processor.

With a range of more than 100 kilometres, the vehicle was manoeuvrable enough in flight to attack moving surface targets such as ships. Another advantage was that if an infrared seeker or other terminal guidance system was added, the vehicle would become a sophisticated weapon at a fraction of the cost of conventional “stand-off” weapons.

Development of Kerkanya continued through the late 1980s and early 1990s with a successful series of flight tests being carried out at Woomera in 1988 and 1989. These tests clearly demonstrated that the vehicle could outperform existing and planned glide bombs in the US and North Atlantic Treaty Organisation (NATO) inventory.

In 1991, a 1/8th scale model of Kerkanya was employed in wind tunnel tests to examine the performance and stability characteristics of Kerkanya and to provide data for simulation and flight control system development. However, a planned series of Kerkanya trials never eventuated because of funding cuts.

In 1995, AWA Defence Industries (lAWADI, ater taken over by Britsh Aerospace) signed an exclusive agreement with DST to assess the world-wide market potential for the technology. Soon thereafter, AWADI acquired the rights to commercialise the technology of the DSTO glide bomb design.