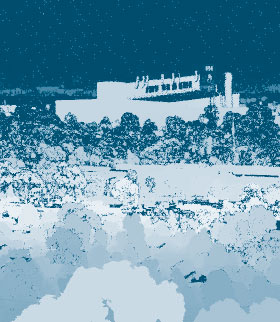 LADAR emerged from the highly successful LADS (Laser Airborne Depth Sounder) technology. LADAR, a combination of laser and radar, produces an image by scanning a very high repetition rate laser rangefinder over a scene to produce a three dimensional map that resembles in texture a radar image.

There is no actual involvement of conventional radar; the LADAR term is used to draw an analogy because the system uses techniques exploited in microwave radar.

DST Group’s LADAR has a range of several kilometres. The system has the potential to enhance the effectiveness of the ADF by providing a commander with the ability to collect a 3-D data set, in real-time, and using 3-D visualisation of the results, identify and recognise potential targets and extract intelligence information about them from all aspect angles.

Targets are located in scenes by interactively ‘flying’ through the imaged scene allowing analysis of potential targets from various viewing perspectives. Target detection is significantly enhanced in cluttered environments by using LADAR’s ability to analyse targets when removed from the scene using range gating.

DST has a technology demonstrator model of its LADAR system currently undergoing trials. Its development includes a model suitable for use in helicopters and other military platforms.