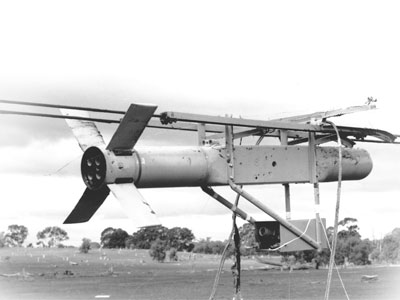 The development of Malkara, a heavy anti-tank wire-guided weapon system, began in 1952 at the Government Aircraft Factory in collaboration with Aeronautical Research Laboratory (ARL) and Weapons Research Establishment (WRE).

Malkara, an Aboriginal word meaning ‘a shield’, was a concept first credited to Dr William Butement. J.M. (Murray) Evans, a research scientist specialising in stability and control of flight vehicles at the ARL, was Project Officer and Chief Designer of Malkara.

Malkara was propelled by an integral solid fuel motor – Marloo – which was one of the first rocket motors developed in Australia.  The motor was designed at the WRE.

Malkara was a short stubby rocket 1.8m long and 20cm in diameter, weighing 98kg. It had the conventional arrangement of cruciform mid-section wings and fail fins. A pilot steered it along his line of sight to the target using a joystick to transmit impulses down a thin cable paid out as it flew. The amplified signals in the missile caused it to pitch or yaw by moving the lateral or the vertical pair of wings. Any tendency to roll was detected by a gyroscope which corrected it automatically by producing an opposing wing movement. The early versions of Malkara had an effective attack range between 450m and 1800m, with a flight time of about 15 seconds. Later versions had twice this range.

The trials held at Woomera resulted in an order being placed for 150 missiles for evaluation by the British Army; a further 1,000 missiles were ordered in August 1959 following successful evaluation trials in the United Kingdom.

Malkara ceased production in 1964, but the experience gained in its development was later used in the design and development of the Ikara anti-submarine weapon.