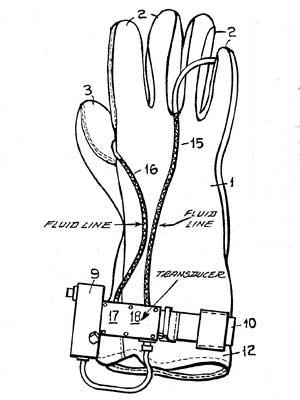 The Pilot’s force measurement glove, invented by Dr Garth Morgan, William Menadue and Robert Clarke in the early 1980s, was a world-first for Australian engineers and an invention that revolutionised in-flight testing procedures.

The glove, developed by Defence scientists at the request of the Royal Australian Air Force (RAAF’s) Aircraft Research and Development Unit (ARDU), was designed for use in high performance fixed-wing aircraft that featured a control column with a hand control grip. A standard issue RAAF pilot’s glove was adapted to incorporate special pads — one attached to the palm and a second across the middle joints of the second and third fingers.

The pads contained sacs filled with silicone oil that were connected via pressure transducers to a wrist-mounted electronic display unit. The pressure transducers within the display unit emitted electrical signals that drove a digital display calibrated in either lbf or Newtons. A modification allowed the digital display to be strapped to the pilot’s thigh when testing an aircraft such as the French-built Mirage fighter. The glove was developed as a type of feedback device for pilots using electronic equipment. This was so they could gain a quantitative measurement of ‘stick’ force which, when taken with the known load factor and variation in airspeed, allowed calculation of critical parameters such as ‘stick force per G’ and ‘stick force gradient’ in non-manoeuvring flight.

Previously measurement devices, such as spring balances, or even subjective estimates had been used to gauge control column forces. The glove was powered with two 9-volt alkaline cells, making it independent of aircraft-integral flight test instrumentation.

An Australian patent for the invention was granted in 1983 and, in 1985, the glove was displayed at the Paris Air Show, where it attracted wide interest. The technology was transferred to industry in 1989 after further testing, where Normalair-Garrett Australia undertook to develop and manufacture the glove. The company marketed the glove as the ‘Control Stick Force Measurement Glove’. Meanwhile, the glove went into service with ARDU.