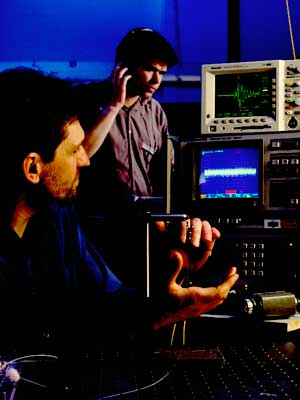 PIPRS was a concept developed by Defence scientists in Sydney during the 1980s to determine the range of active acoustic transmissions used in anti-submarine warfare to locate possible targets.

PIPRS was invented by Tony Collins who, while working on a project dealing with the sonars associated with the Oberon submarines, conceived a new means of using the existing technology that would enhance it considerably. He was assisted by Juoko Uusioja in developing the idea.

Traditionally, passive sonar arrays towed behind a submarine were used to determine the presence, location and direction of travel of other vessels by means of their acoustic signatures. Active sonar pings from such vessels tended to confuse the hydrophones.

PIPRS was based on intercepting the active sonar ping from hunting vessels rather than their acoustic signature. The idea was to use hydrophones on a submarine to intercept the sonar ping from the hunting vessel in a curved wave-front and use this data to determine the location of this vessel before it drew within range to receive the reflected signal from the hunted vessel.

Determining the origin of the initial transmission before the signal returned to its source provided the hunted vessel with the opportunity to take action first, giving it a great advantage. The team was able to develop a system for achieving this advantage by using standard hydrophone arrays and commercial microcomputers, and developing appropriate algorithms.

Having developed the prototype, DSTO (now DST Group) licensed SonarTech Pty Ltd to commercialise the system. SonarTech subsequently supplied PIPRS equipment to the Royal Australian Navey (RAN’s) fleet of Oberon class submarines, and to other navies around the world, including the US.

An enhanced system, the Submarine Acoustic Transistory Event Processing System (SATEPS), was deployed in the Collins class submarines. The company produced other sonar equipment such as the Submarine Acoustic Array Processing System (SAAPS) — a towed array and flank array sonar processor for both Oberon and Collins class submarines. The PIPRS principle was also used to develop a torpedo defence system that was successfully trialed by US submarines.