The scientists were able to exploit new computer technologies to assess camouflage designs that ultimately proved successful in trials and were adopted by the Australian Army and used in Vietnam. Later, using the same technology, the Malaysian armed forces were assisted in developing camouflage patterns to match their local conditions.

Research continued into developing innovative combat clothing for the use of Australian soldiers, and into ways to integrate signature management into protective clothing. 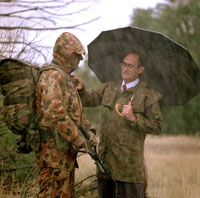 In collaboration with the Australian Army, DSTO (now DST Group) developed Rain Gear, a rain garment to be worn over a soldier’s normal gear. A radical departure from previous rain coats, the garment permitted a soldier to keep dry in the rain whilst allowing perspiration to be freely evaporated into the outside environment. The fabric was a micro-membrane embedded in between two layers of material: one knitted the other woven. Completely Australian made, Rain Gear went from concept to production in 18 months.

In 2001, DST received an urgent request from the Australian Army to supply camouflage uniforms for Australian troops being deployed to Afghanistan. In six weeks, the request went from a concept through to the scientific development of the colour pattern that was necessary, through to prototypes and then technology transfer to industry. The suits were produced with three days to spare.

Defence scientists and Australian industry worked together to develop a lightweight Chemical Biological (CB) combat suit that was suited to hot and humid environments and also met the Australian Defence Force requirements for durability and functionality.

DST worked with an Australian company, Melba Industries, to develop a breathable tri-layered fabric with the chemical absorbent as the middle layer. As a result, the new ensemble is comfortable and manufactured as a single garment instead of an overgarment. Melba Industries has continued to work with DST and is the sole source provider of the CB Combat Suit to the Australian Defence Force (ADF).

Currently, DST is working with several countries in The Technical Cooperation Program (TTCP) on research into Integrated Ballistic and Blast Protection for Warfighters. While body armour offers a considerable degree of protection against penetrative injury from bullets, recent operational experience has shown that the impact of a high velocity blunt object can distend the back face of the protective materials into a sizeable cone-shaped deformation. Known as Behind Armour Blunt Trauma (BABT). This can result in a substantial body blow to the wearer. Although not usually fatal, injuries of the non-penetrating blunt trauma kind can have serious long-term health consequences.

Another kind of explosive device increasingly deployed in conflict zones, called a thermobaric weapon, causes harm with the brutal shock wave and searing heat of a highly pervasive oxygen-depriving fireball that can asphyxiate, injure airways and air-containing organs, and inflict severe burns on unprotected skin. The body armour systems currently in use offer no protection against these hazards. In addition to researching improvements for Combat Body Armour (CBA) materials, DST is also undertaking allied research into heat stress assessments and functional ergonomic assessments of the effect of various CBA systems.