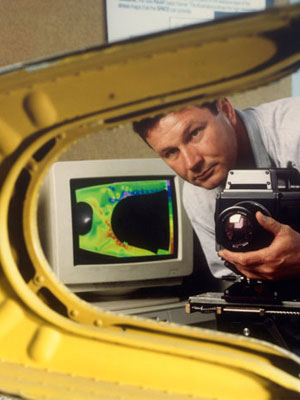 Thermoelasticity is the study of stresses generated by different loads at different temperatures.

Defence scientist, Dr Jim Sparrow initiated research into this area in 1985 when a highly-sensitive infrared temperature detector known as Stress Pattern Analysis by the measurement of Thermal Emission (SPATE) was purchased.

His colleague, Dr Albert Wong then discovered there was an anomaly in Lord Kelvin’s Law (1824-1907) — an absolute scale of temperature first enunciated in 1853 and used to derive a measure of applied stress from heat changes in a metal structure. This cast doubt upon the accuracy of the measurements obtained with SPATE, which could resolve cyclic temperatures to 0.001oC.

Dr Wong, with Dr Jim Sparrow and Dr Shane Dunn, used the anomaly to yield algorithms which made possible the measurement of total stress. This offered a potential for measuring residual stresses which had important ramifications in structural analysis.

In 1992, SPATE was replaced with a system known as Focal-plane Array for Synchronous Thermography (FAST), the first of its type in the world. Developed by Dr Thomas Ryall and Dr Albert Wong, FAST was an infrared camera system designed for analysing stresses in metal and composite structures. It produced, in minimal time, higher resolution maps of stress in structures than was previously possible and represented a major advance in technology. FAST stress maps could identify critical regions of high stress that might lead to fatigue or overload failure in structures, and the technology was used to help identify the point of structural failure that resulted in the loss of a Royal Australian Air Force (RAAF) P3-C Orion aircraft.

This pioneering work played a cornerstone role in the advancement of full-field measurement of cyclic stresses through thermoelastic stress analysis. At the time, this research led to the design of sophisticated instrumentation, used in routine engineering applications on a day to day basis not only in the aviation sector but in other areas such as the automobile industry.

In 1995, Dr Ryall and Dr Wong were awarded the Minister’s Award for their pioneering research into thermoelastic stress analysis.