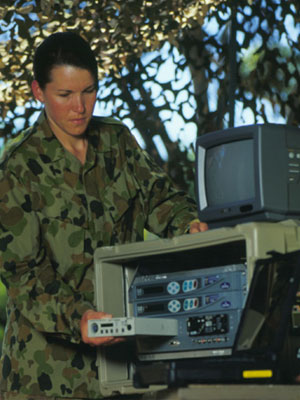 The Theatre Broadcast System (TBS) was one of the first ‘Compact Receive Suites’ designed and developed at DST Group.

Work began on the TBS in 1996 following exposure to the new US Global Broadcasting System (GBS). Defence scientists realised that the GBS would not meet Australian Defence Force (ADF) requirements, but believed that the technology behind it could be adapted and modified for military purposes. TBS was the result.

TBS was originally developed as a Concept Technology Demonstrator to test its ability to deliver secure video, audio, imagery and other data, to troops in the field. It was further developed as a mature technology by the then Defence Materiel Organisation (DMO).

One of the problems Defence researchers considered when developing the TBS was that the US and UK military versions of these systems used different operating standards, impeding their ability to exchange and share information. An exercise conducted in 2002 successfully demonstrated interoperability between Australia’s TBS and the US GBS. As a result of the exercise, the US decided to change its GBS architecture to line up with the Internet Protocol (IP) used by DST, which became the standard architecture for Allied and North Atlantic Treaty Organiszation (NATO) forces. The UK has also adopted this standard for its Defence Broadcast System.

TBS was first used operationally in East Timor by forces in Dili, Ocussi, Balibo and Suai during the early days of Australia’s peacekeeping mission where, for the first time, battalion headquarters had a wide band communications system in the field. TBS could be carried into the field in two small trunks, and a small antenna dish was the only visible sign of a communications post once the system was operating.

TBS has also been used in the Middle East and the Solomon Islands, and in tsunami-ravaged Banda Aceh during the humanitarian relief operations carried out in 2005. Receive units and Transmit/Receive units incorporating a satellite request link have also been fitted to Navy ships including HMAS Sydney, Melbourne, Manoora, Gascoyne and Kanimbla.

TBS is still in use today. It gained acclaim not only for providing better information services than previous military versions but also for establishing operating protocols taken up by other military systems.

Andrew Coutts
For his work in establishing and maintaining the TBS in East Timor.