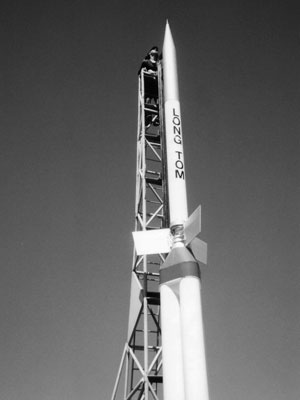 Throughout the 1950s, 60s and 70s, Australian defence scientists played a leading role in upper atmosphere research with the development of high altitude vehicles known as HAT (High Altitude Temperature) and HAD (High Altitude Density).

These were developed at Weapons Research Establishment (WRE) in the 1950s to measure the upper atmosphere physical constants of temperature, pressure and density in support of investigations planned by the University of Adelaide and by universities in the United Kingdom.

In the 1960s, the HAT and HAD vehicles were superseded by smaller locally developed sounding rockets known as Kookaburra and Cockatoo. Kookaburra was used in an international experiment in March 1970 when a group of firings was carried out simultaneously with Britain and India in order to obtain a comparative assessment of atmospheric temperature and ozone levels.

The first WRE-designed and developed sounding rocket was Long Tom. Long Tom was originally an instrumentation test vehicle adapted for carrying equipment used for research into atmospheric conditions. It was first fired in October 1957, only ten weeks after the decision had been taken to make the rocket.

The Aero-High was the largest locally-designed sounding rocket, used for the release of chemicals in the upper atmosphere at night and at twilight. The artificial glow clouds that were formed from the chemical releases were observed at ground level using cameras and special optical equipment. The observations enabled properties of the upper atmosphere to be determined and chemical reactions at very low pressures to be studied.

Other locally developed rockets used during the sounding program included Lorikeet and Corella. Between 1960 and 1976 more than 400 sounding rockets were fired from Woomera.