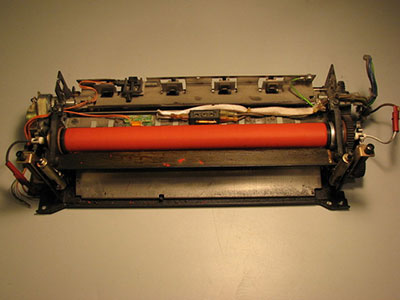 Introduced in 1959, the automatic Xerox copier brought about a revolution in business and industrial communications.

The ‘Wet’ electrophotographic process that was the basis of the modern photocopying industry was invented and developed by K.A. (Ken) Metcalfe and R.J. (Bob) Wright at the South Australian branch of the Defence Standards Laboratories (DSL), in 1952.

The xerography process — literally ‘dry writing’ from the Greek words xeros and graphos — was invented by Chester Carlson, a United States patent attorney in 1935. Ken Metcalfe became interested in Carlson’s xerographic process. He saw the technology as a possible means of producing industrial radiographs more cheaply and rapidly than on X-ray film. It soon became clear to him and his co-workers that although suitable for letterpress copying, dry-powder could not reproduce tonal gradations and the fine detail required in radiographs of welds and casings.

Metcalfe and Wright’s invention of the ‘Wet’ process had many advantages over the dry powder method of development. Not only did it produce improvements in the quality of continuous tone images, but the liquid process also opened up many new applications beyond those of conventional photography and printing. Among these were greatly improved resolving powder, production of permanent images without fixing treatments and the ability to produce images in any colour or combination of colours. This was a major advancement in xerography or, more accurately, electrophotography.

The Australian Department of Supply patented the new technology in 13 countries in order to protect its rights to the invention. As well, firms in the United States, England, Japan and Europe were licensed to use the patent, with licence fees and royalty payments being received by the Commonwealth government. In all, over 90 patents were taken out in Australia and overseas while the Commonwealth received royalties that peaked at one million dollars per year. In the mid-1960s, this licence income was more than twice the operating costs of the South Australian branch of DSL.

Metcalfe and Wright’s liquid development of electrophotography was of international significance. Its main commercial application has been in the development of office photocopying machines.

1971 — Honorary Fellow of the Institute of Photographic Technology

Ken Metcalfe
Only third such award to that time in the Institute’s history.

Ken Metcalfe
For his work in electrophotography.

1971 — Honorary Fellowship by the Institute of Australian Photographers

Ken Metcalfe
In recognition of his contribution to both his country and to photography, and as an acknowledgement of his inventive prowess in the field of electrophotography.