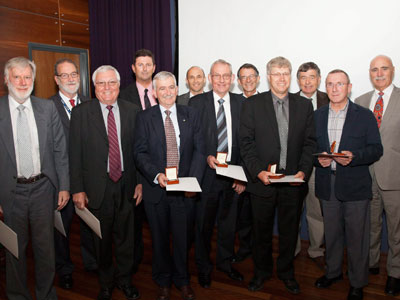 DSTO scientists have been recognised for their work on the Jindalee Operational Radar Network.

The lecture, given by Chief of DSTO's Weapons Systems Division Bruce Ward, outlined the triumphs and pitfalls of the JORN project and explained the science behind over-the-horizon radar (OTHR).

“This is a story that has evolved over 60 years and it is one of which DSTO can be rightly proud,” Dr Ward said.

The JORN project arose out of extensive research undertaken by DSTO into OTHR beginning in the early 1970s. As part of the 1987 Defence White Paper, the Government placed a high priority on wide-area surveillance of the north and north-western approaches to Australia and OTHR was seen to be the most cost effective solution. As a consequence, in December 1990, the Government approved the design and construction of JORN.

The Jindalee family could be said to span three generations.

“There were the early pioneers who had the vision of long-range over-the-horizon detection and who were pushing at the extreme frontiers of ionospheric physics, high power radio frequency equipment and signal processing,” Dr Ward said.

“There was the small tight-knit team assembled and protected by John Strath who were responsible for the Jindalee Stage A and Stage B radars and the specification of the JORN network.

“And there is the current generation: the scientists, engineers and technicians in DSTO who continue to push the edge of the technology and the operational community in the Australian Defence Force (ADF) who apply it on a daily basis to Australia’s defence and national security needs.”

“The thing that made the Jindalee Facility Alice Springs (JFAS) and JORN a success is the dedication and effort of the people. We worked ridiculous hours over days and months to meet milestones. These milestones were not driven by commercial incentives but they were a result of vision, passion, the pursuit of excellence and not wanting to let the team down.”

The Defence Science and Technology Organisation (DSTO) is part of Australia's Department of Defence. DSTO's role is to ensure the expert, impartial and innovative application of science and technology to the defence of Australia and its national interests.