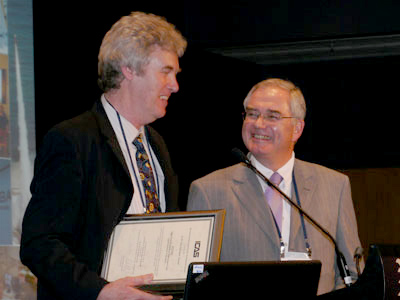 A Defence Science and Technology (DSTO) team, investigating the properties of hypersonic flight with Australian and international partners, was today presented with the prestigious von Karman Award for International Co-operation in Aeronautics by the International Council of Aeronautical Sciences (ICAS) at a ceremony in Brisbane.

"The award is a tribute to the significant scientific outcomes of the hypersonic test program and the cooperative manner in which the team is conducting its research," Dr Zelinsky said.

Knowledge gained from this technology will be applied to the development of future HIFiRE flight vehicles and testing of advanced air-breathing hypersonic propulsion engines, known as supersonic combustion ramjets (scramjets).

The von Karman Award was presented at the 28th International Council of Aeronautical Sciences Congress, where 12 DSTO research papers were delivered to 600 participants, representing 40 nations.

DSTO also won the von Karman Award in 2002 along with the Royal Australian Air Force (RAAF) and the Canadian Armed Forces for research into extending the life of the F/A-18 aircraft.

Dr Bill Schofield, a former laboratory director at DSTO, was presented with the ICAS Daniel and Florence Guggenheim Memorial Lecture award for his enduring contribution to aeronautical science in Australia.