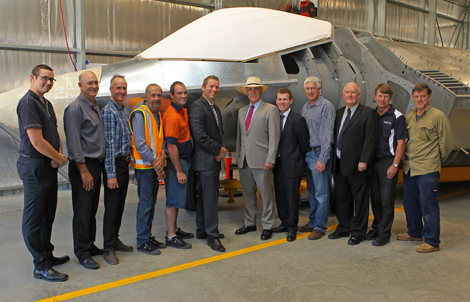 Minister Snowdon poses with DSTO personnel in front of the Iron Bird.

On 17 April the Minister for Defence Science and Personnel, Warren Snowdon, unveiled a full-scale model of the F-35A Joint Strike Fighter (JSF) which the Defence Science and Technology Organisation (DSTO) will use to study the effects of electromagnetic compatibility and interference on the aircraft.

Called Iron Bird, the Australian-built model will be tested under simulated electromagnetic conditions during the acquisition and through-life sustainment of the JSF.

“This study is a significant part of ensuring the protection of the JSF against electromagnetic environmental effects such as lightning and static discharge which can impair the performance and safety of aircraft,” Mr Snowdon said during a visit to the DSTO laboratory in Adelaide.

The JSF is a fifth-generation aircraft with highly complex electronics, sophisticated software and a structural airframe made of composite materials. This exposes the aircraft to electromagnetic interference from both naturally occurring phenomena and man-made sources, including telecommunication transmissions and radar.

"The impact of these interferences needs to be well understood and appropriately managed," Mr Snowdon said.

“DSTO has developed world-class expertise in the investigation of electromagnetic radiation impact on aircraft and is engaged directly with the United States JSF Joint Project Office to undertake this study using the Iron Bird model."

“The data captured will help in providing potential reductions in the cost of owning the JSF fleet and enhancing the aircraft’s capability.”

The DSTO test methods provide a rapid, cost-effective means of assessing and monitoring the JSF’s ability to withstand electromagnetic exposure and minimise any impact on its systems and performance.

Mr Snowdon said DSTO’s research would support the verification for compliance and airworthiness certification for the JSF aircraft.

Australia’s first two F-35As are due to be delivered to a United States-based training facility during 2014‑15 when Royal Australian Air Force (RAAF) pilot and maintainer training will commence on the aircraft.