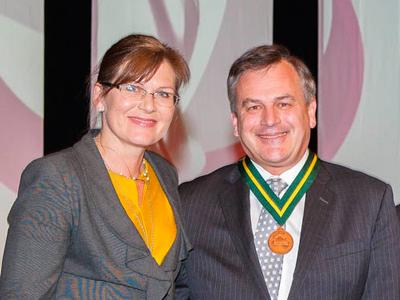 The award, named after Australian ICT pioneer Trevor Pearcey, is presented annually for lifetime achievement and contribution to the development of the information technology professions, research and industry.

Dr Zelinsky leads the Defence Science and Technology Organisation (DSTO) and is a former Director of CSIRO's Information and Communications Technologies Centre.

On receiving the award in Melbourne last night, Dr Zelinsky said he was immensely moved and touched by the recognition.

"Trevor Pearcey was a visionary pioneer, a brilliant scientist and a great innovator. To receive an award in honour of such a great Australian is deeply humbling," Dr Zelinsky said.

"Throughout my career I have had the privilege of working with hundreds of brilliant Australian ICT professionals and without their fabulous support I would not be receiving this award," he added.

The World Economic Forum named Dr Zelinsky a Technology Pioneer in 2003, 2004 and 2005. He has been included in Engineers Australia’s list of the 100 most influential engineers since 2009.

Dr Zelinsky was Chief Executive Officer and co-founder of Seeing Machines, a high-technology company which develops computer vision systems and is listed on the London Stock Exchange.

At CSIRO, Dr Zelinsky had executive responsibility for the Square Kilometre Array, the world's biggest radio telescope which will be jointly hosted by Australia and South Africa.

The Pearcey Medal is awarded by the non-profit Pearcey Foundation which was established in 1998 to recognise outstanding achievements in the Australian ICT sector. The Foundation is also involved in public policy on critical national issues such as productivity, the digital economy and national infrastructure.