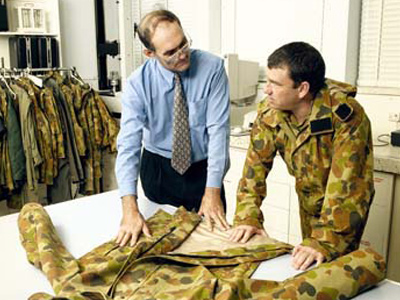 Graeme Egglestone (left) inspects a camouflage jacket with a soldier.

The award was presented at a function at DSTO in Melbourne.

A scientist with DSTO since 1968, Mr Egglestone leads a small team developing clothing that provides protection against ballistic impact, biological and chemical agents and visual and near-infrared camouflage.

“Mr Egglestone’s contribution to Defence in conceiving, developing and bringing into service a range of combat clothing ensembles has delivered critical protection for our forces while they serve in the most demanding of environments,” Senator Hill said.

“Our forces in Iraq are supplied with the most effective camouflage desert uniform and a lightweight Chemical Biological Combat (CBC) Suit, both of which were developed by his team.”

The camouflage design was designed at short notice to suit the terrain in Afghanistan better than the standard pattern. The CBC suit is breathable, so personnel can work harder and longer in extreme conditions without risking exposure to chemicals.

The team also developed a fabric for all new combat clothing allowing our forces to be better camouflaged against night vision surveillance. Overseas laboratories have established big teams to address this problem.

The Australian CBC suit has proven to be better suited to Australian Defence operations and in some aspects has outperformed other international protective garments used for the same purpose.

Senator Hill said he was particularly pleased that the technology developed by Defence had been transferred to industry.

“Not only is the science for the military uniforms and the CBC suit developed by Australians, the clothing itself is manufactured in Australian factories by an Australian workforce,” Senator Hill said.

"They also allow our defence scientists to benchmark their work against the world’s best and gain important international recognition.”

Senator Hill congratulated all recipients and said it was significant that the valuable work of Australia’s defence scientists was being recognised as technology continued to play an increasingly important role in ADF deployments around the world.

This year, a total of eight awards were presented for activities undertaken by Australian Defence researchers during 2002.

Awards were presented to:

For developing a hazard assessment model to predict the dispersion of airborne materials in the event of a chemical, biological and radiological attack.

For a significant contribution to the understanding of lower leg injury caused by anti-personnel landmines, the research resulting in the development of a synthetic human leg to test the effects of landmine blasts.

For contributing to collaborative research on non-destructive inspection techniques for the detection and measurement of corrosion in aging aircraft.

For an original contribution to noise suppression in open aircraft weapon bays.