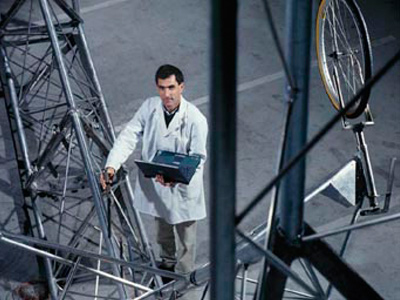 Dr Chris Norwood was today recognised for his significant contributions to the management and control of noise and vibration in maritime platforms, particularly the Collins Class submarine.

At the Defence Science and Technology Organisation (DSTO) in Melbourne today, a 2000 Minister's Award  was awarded to Dr Chris Norwood.

Dr Norwood receives the award for his significant contributions to the management and control of noise and vibration in maritime platforms, particularly the Collins Class submarine.

His outstanding scientific leadership has brought himself and his team international recognition in the field of acoustics and vibration.

The work conducted by Dr Norwood contributed significantly to fast-tracking new Australian submarines HMAS Dechaineux and HMAS Sheean to a desired level of capability by the end of 2000.

Dr Norwood and his team have developed advanced techniques for measuring and controlling the noise of the submarines, thereby reducing their "visibility".

His work is an example of the world-class research being undertaken at DSTO to enhance Australia's defence capabilities.

The Minister's award for achievement was established in 1987 to recognise and reward scientific talent in the Defence organisation.

Past winners include scientists recognised for their work in areas such as the Jindalee Over-the-Horizon Radar (JORN), crack patching technology for repairing aircraft structures, high performance steel and welding in the construction of the Collins Class submarine and electronic support measures for electronic warfare.