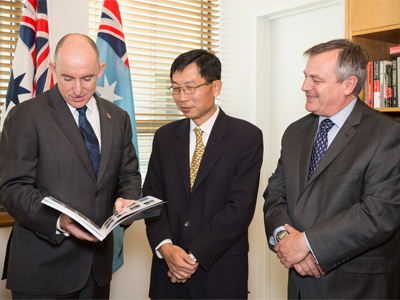 Increased cooperation is in line with the Australian and Singaporean Governments’ desire to enhance the relationship, including through deeper defence science and technology collaboration.

Mr Robert welcomed Mr Tan to Australia and thanked him for his continued efforts to advance the relationship between Australia and Singapore on science and technology matters.

“I can attest first hand to the professionalism of the Singaporean Armed Forces and their willingness to be innovative in their use of science and technology to deliver outstanding military capabilities.”

Mr Tan is leading a Singaporean delegation attending a workshop on Systems Engineering and Integration organised by DSTO in Adelaide.

“There are real benefits for both our countries in sharing knowledge, especially in systems engineering and integration—an area in which Singapore is considered a world leader,” Mr Robert said.

“Australia can learn from Singapore’s adoption of innovative technologies and how they readily partner with industry and universities to get enhanced capabilities into the hands of their war fighters as quickly as possible,” Mr Robert said.