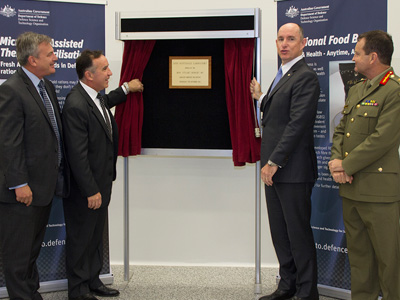 The Defence Science and Technology Organisation (DSTO) will investigate the use of a new processing technology to produce high-quality, long-life, shelf-stable foods for Defence ration packs.Assistant Minister for Defence ,Stuart Robert said the DSTO study will examine the viability of introducing Microwave Assisted Thermal Sterilisation (MATS) technology, which has been demonstrated overseas to produce better tasting packaged foods in minutes rather than hours.

“Our deployed troops need light-weight, long-life rations and this technology has the potential to deliver,” Mr Robert said.

DSTO will carry out the study in collaboration with the Australian Army and the Centre for Food Innovation, which includes the University of Tasmania and CSIRO.

Mr Robert announced the study during a visit to Scottsdale, Tasmania where he opened DSTO’s $19 million redeveloped nutrition research facility.

The Tasmanian facility, which has been providing a food science capability to the Australian Defence Force (ADF) for the past 60 years, has undergone a major two-year refurbishment that was completed last month.

“DSTO now has a state-of-the-art food science laboratory designed to deliver the best nutritional outcomes for Defence while enhancing combat ration packs and improving the quality of fresh feeding for our troops,” Mr Robert said.

“With its new research facility DSTO is well placed to capitalise on the new MATS technology, which has the potential to provide a superior product not only for Defence but for emergency, humanitarian aid, disaster relief and commercial applications.

“The DSTO study will provide a cost-benefit analysis and identify the potential applications for the technology beyond Defence’s requirements, so that industry can take an informed decision to invest in the technology,” he said.

The study will take six months to complete and involve consultation with the Australian food industry.

“The study will look at opportunities for exploiting the technology to cater to the readymade meal market in Asia,” Mr Robert said.

“If investment in the technology leads to a growth in food production in regional areas, it will be welcome news for Australian jobs and the local economy,” he said.