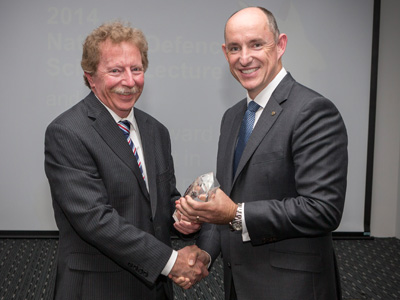 A Defence physicist whose work has helped to ensure the safety and serviceability of Australian military aircraft and submarines has won the 2014 Minister’s Award for Achievement in Defence Science.

The Assistant Minister for Defence, Stuart Robert, congratulated Dr Stephen Burke from DSTO for developing new solutions and techniques that have contributed significantly to the safe and cost-effective operation of Defence equipment.

“Dr Burke’s expertise has been critical in diagnosing and monitoring the structural health of our aircraft and submarines to prevent major failures,” Mr Robert said.

An expert in nondestructive evaluation (NDE), Dr Burke has been responsible for research programs examining Defence platforms for structural damage or flaws caused by ageing.

He has initiated structural management programs to ensure that physical defects or damage are reliably detected and addressed before they impact on the capability of the platform.

“Dr Burke’s work underpins the structural management of Air Force and Navy fleets, ensuring their availability for operational use and enhancing the safety of the Australian Defence Force (ADF) personnel who operate them,” Mr Robert said.

In the 1990s, when the Collins class submarines developed problems with their propeller blades, Dr Burke’s innovative work with a multidisciplinary team allowed the boats to remain operational and saved the Navy more than $10 million by not having to replace the propellers prematurely.

“Dr Burke’s work has significantly reduced maintenance requirements in many areas and has contributed to cost savings in the order of many millions of dollars".

“He is a thoroughly deserving recipient of this award,” Mr Robert said.

Imagery will be available through the Defence Image Library.