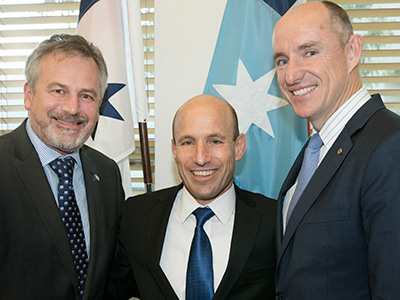 Assistant Minister for Defence, Stuart Robert, yesterday met with a defence research delegation from Israel to discuss areas of mutual interest including science and technology.

The Israeli delegation was led by the Director of Defence Research and Development (MAFAT), Rear Admiral Ophir Shoham.

Mr Robert said the meeting provided an opportunity to re-visit and expand upon some of the discussions he held with Israeli officials last year while leading an official Australian delegation to Israel.

“Today’s discussions with the Israeli defence research delegation included a valuable exchange of views that I hope will further strengthen our relationship and lead to joint research and development work in the future.”

The ADF currently operates the Israeli-made Heron unmanned aerial vehicle, which is fitted with a specialised radio repeater system used to extend the operating range of battlefield communications.  The system was developed by Australia’s Defence Science and Technology Organisation (DSTO).

As part of their visit to Australia the Israeli delegation is also visiting DSTO laboratories in Adelaide and Melbourne.