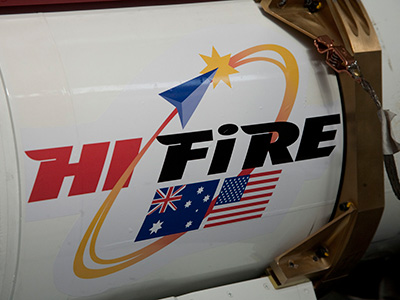 The flight experiment, known as HIFiRE 7, was designed to determine how scramjet engines start up at high altitudes, and to measure how much thrust the engines produce at lower altitudes.

The scramjet stage of the experiment commenced after completing a suborbital flight and re-entering the atmosphere as the payload accelerated to over seven times the speed of sound or 2km per second.

Dr Ken Anderson, Chief of the DST's Aerospace Division, said the trial was also a key technology flight to test complex systems necessary for the reorientation and control of hypersonic vehicles outside the atmosphere and in the atmosphere at hypersonic speeds.

During atmospheric re-entry, the flight data stream from the payload was lost just 15 seconds before the completion of the flight, possibly due to overheating of the voltage regulator in the telemetry system.

However, data received in the early part of the flight showed that the test vehicle was functioning perfectly, the flight was proceeding on the correct trajectory, the flight control system performed flawlessly and supersonic airflow was established in the combustor.

The Science Lead for HIFiRE 7, Professor Michael Smart from the UQ School of Mechanical and Mining Engineering, said although the complete set of data was not received, most of the new technologies worked perfectly.

“I am happy to say this has paved the way for continuing the program,” he added.

According to Dr Anderson, six flights have been conducted in the HIFiRE program over the past decade.

“During this period we have acquired a great deal of experimental data and gained extensive insight into hypersonic physics, helping us to understand the possibilities and the limits of high-speed flight,” he said.

The HIFiRE Program is investigating the fundamental science of hypersonic technology and its potential for next generation aeronautical systems. It involves ten hypersonic flights to gather aerodynamic and scramjet data that cannot be obtained in ground tests.

“Flight testing is inherently risky, but it is the best way to advance scramjet and hypersonic technologies,” Professor Smart said.

A second attempt of the flight is currently being planned in order to capitalise on the existing investment and the encouraging results seen in Flight 7.

The HIFiRE program is a joint collaboration between the US Air Force Research Laboratories (AFRL), DST, Boeing and UQ. The HIFiRE-7 flight trial was coordinated by DST, with rocket motors supplied by the German Aerospace Organisation (DLR). BAE Systems contributed with ground testing of flight software. Additional funding for the flight was provided by the Queensland State Government National and International Research Alliances grant.

In 2012, the HIFiRE Program won the prestigious von Karman Award for international collaboration in aeronautical research from the International Council of Aeronautical Sciences (ICAS).

The next two flights in the HIFiRE Program will be conducted at the Woomera Test Range in South Australia during 2015 and 2016.