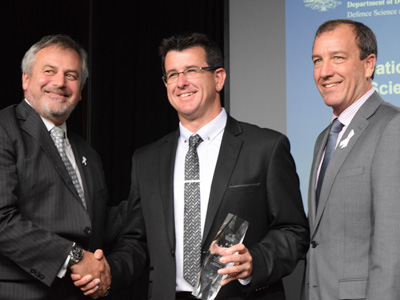 Dr Mark Patterson has won the 2015 Minister’s Award for Achievement in Defence Science for his significant contributions to meeting the increasing demands for the continued protection and wellbeing of Australian soldiers.

At a ceremony in Canberra on 25 November, 2015 Minister for Defence Materiel and Science the Hon Mal Brough presented the award to Dr Patterson from the Defence Science and Technology Group (DSTG) for his research in the soldier combat system, physical employment standards and reduction of heat injuries.

Dr Patterson’s expertise in human physical performance has been critical in developing improved protective combat gear for soldiers, reducing heat injuries suffered by deployed troops and establishing a set of standards that match individuals to tasks, irrespective of gender.

An expert in physiology, Dr Patterson has made a major contribution to the integration of the soldier combat system under the Diggerworks initiative.

Diggerworks was established to ensure that soldiers had the best possible combat ensemble by reducing deficiencies that had been identified in the soldier categorisation and procurement processes.

This ensemble reduces the soldiers’ weight burden significantly without compromising protection through the development of the Tiered Body Armour System.

Dr Patterson also led the ground-breaking research program that introduced objective physical performance criteria for the selection and training of Defence personnel, opening opportunities for women to undertake tasks from which they were previously excluded.

The physical employment standards enable ADF personnel to perform their roles safely and effectively while significantly reducing the incidence of work health, safety and compensation claims.

The Minister’s Award for Achievement in Defence Science, presented annually since 1988, recognises original and outstanding contributions capable of enhancing Australia’s defence effectiveness and efficiency. The award consists of a crystal trophy and a cash prize of $15,000.