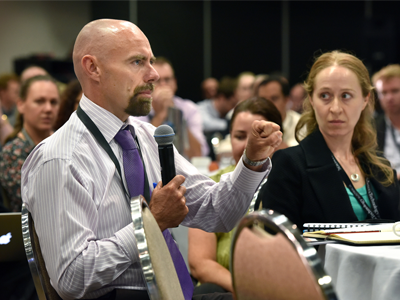 DST delegates Chris Wiren and Kate Foster during a session at Science Meets Parliament on March 1 and 2.

Whether it was a feeling of curiosity or a desire to promote DST Group’s science profile within the Federal seat of government, five intrepid Defence scientists agreed that the recent 16th Annual Science Meets Parliament event at Parliament House on March 1 and 2 was a stimulating experience.

The intensive two-day program for approximately 200 working scientists is aimed at providing professional development and networking to assist them in better communicating science to policy makers, parliamentarians and the media.

Operations Research analyst Vicki Bray who is Director Science Program Navy said she was motivated initially by curiosity because she had little previous experience with “politicians” or big government.

“I had no agenda in mind but I came away impressed by the parliamentarians and their staff that I met, and the interesting briefings we had with senior professionals, parliamentarians, and media representatives,” she said.

“I was able to explain the role of Operations Research in Defence and how this work is of considerable importance to national security.”

David Mawdsley approached the opportunity to engage with senior policy-makers, media representatives and parliamentarians with a degree of uncertainty – unsure of what he was in for.

He was, however, impressed by the meetings and exchanges with senior people and came away from the experience with a much clearer awareness and understanding of what he needed to do to be a more effective science communicator, when engaging people outside his organisation.

“Science communication with parliamentarians is about slow-paced diplomacy where one should not expect rapid results. I now understand the need to keep plugging your messages and appeals for support, in order to achieve your objectives,” Mawdsley said.