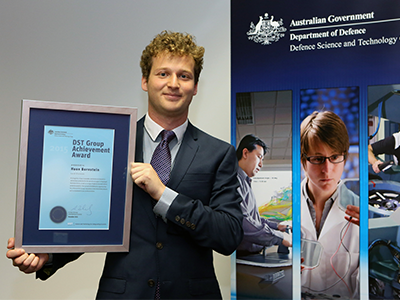 Huon received the DST Group Early Career Achievement award at a ceremony in Canberra in December 2015.

Defence Researcher Huon Bornstein was awarded the DST Group Early Career Achievement Award last December for his work on Armour Mechanics and Vehicle Survivability. In this role he has been pushing boundaries to enhance our Australian Defence Force (ADF) capability.

Whilst studying a degree in Aerospace Engineering and Science at Monash University, Bornstein never envisaged that he would spend his days blowing up vehicles. Yet shortly after joining DST in 2010, he became involved in Bushmaster field trials, which launched his career in an unexpected direction.

“I started working in blast protection for vehicles straight away, learning the computational modelling techniques specifically for that,” Bornstein said.

“Soon after I was lucky enough to be involved in the Bushmaster field trials; and that work remains one of the highlights of my career thus far.”

“Through university I’d always wanted to work with aerodynamics or propulsion and was initially disappointed that I didn’t get a position in a related area, but it’s all turned out pretty nicely.”

Those early Bushmaster tests have led to further trials in which Huon Bornstein has examined the potential of fluid-filled containers for blast protection. Most recently that has included capturing the detonation of explosives underneath jerry cans.

“The idea behind the whole program, which has been going on for a few years, is to see whether we can redistribute fluids that we are already carrying on a vehicle in arbitrary locations and relocate them to enhance blast protection,” he explained.

“Recent tests have revealed that water-filled tyres, for example, don’t really help dampen the overall global motion but the liquid may be helpful in distributing the explosive forces and thus reducing localised deformation.”

Huon Bornstein is leading the world on near-field characteristics of blasts on fluid-filled containers, whilst also completing his PhD at RMIT University.