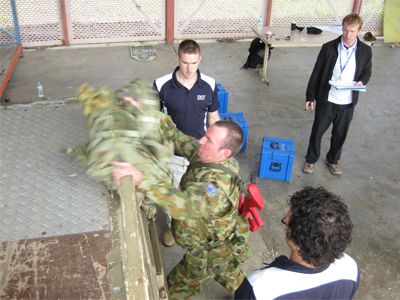 (L-R): Stuart Best, Robert Savage and Daniel Ham compared the value of a generic box lift and place task with task-related assessments such as this pack lift.

Soldiers conduct numerous manual handling tasks that require high levels of muscular strength and endurance. However, traditional physical tests, such as push-ups, sit-ups, and pull-ups, do not necessarily assess whether a soldier is capable of performing job-specific physical tasks.

Defence scientist Greg Carstairs along with his colleagues have compared the usefulness of generic physical tests such as push-ups and sit-ups with a box lift and place, which is a task-related predictive test for soldiers in the Australian Army.

“We also demonstrated that pull-ups and push-ups were poor predictors of performance in the majority of job tasks.”

“Our studies have helped to determine the relevance of Army’s generic fitness tests and the potential of a simple but highly predictive task-related test to replace these tests as measures of job task performance.”

As a result, the Army is now implementing more appropriate task-specific physical employment standards, such as a standard 25 kg box lift test for all soldiers, with a 30 kg test for combat soldiers and greater weights for other more demanding roles.

Following the development of evidence-based PES for Army, Navy and Air Force are now benefiting from the team’s expertise. The team started working with Navy in 2013 to determine tasks that are relevant to life on board all naval platforms.

“For Navy we’ve taken the approach of looking at a “whole of ship” baseline standard, asking what physical tasks are expected to be performed by everyone on board any naval platform. If there’s a fire, every sailor needs to be physically capable of extinguishing it,” says Carstairs.

“The first phase of developing physical standards is to observe ship operations and quantify the various task demands.”

“Trials are ongoing, as we need to characterise in great detail what is happening. For instance, there is far less space to manoeuvre on a ship, so the cardiovascular endurance demands are quite different to Army.”

Therefore, the team is still considering what the tests might look like. Once that’s decided they’ll put forward proposals to Navy. It’s likely the tests will be ones that maximise test sensitivity and specificity whilst meeting resource and implementation practicalities.

“After that they’ll still have to consider how they roll it out. It is likely to take a couple of years to be implemented across a whole service,” Carstairs explains.

The team also began working with the Air Force in 2013, where Carstairs is currently leading the Air Force task quantification program for the technical-based employment categories.

This requires quantifying the physical demands of the different Air Force employment specialties. The team is ready to complete that phase and start considering what the tests might look like.

Carstairs says it has been a wonderful chance for human performance scientists to apply their skills to serve the ADF.

“Taking the science out into the field, putting GPS and heart-rate and oxygen consumption monitors on the troops to understand the demands placed on them, is really rewarding and interesting work.”