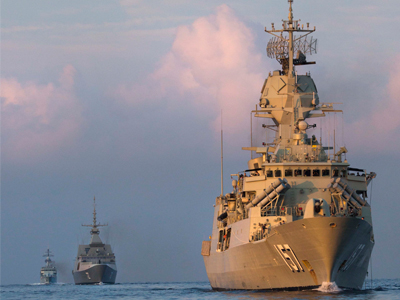 DST and Engineers Australia are hosting a unique lecture series.

They will present and discuss their research and work in the area of Australian Maritime Defence Science and Engineering.

The first lecture titled The Development of Radar Absorbing Materials for Australian Defence Platforms will be given by Dr Amiet, Head of the Electromagnetic Signature Management and Anechoics Group at DST Melbourne. The second, presented by Dr Burke Group Leader of Acoustic Material Systems at DST Melbourne, is titled Fatigue cracks, fast jets and Faraday’s law: non-destructive evaluation for structural integrity.

These lectures will provide an insight into the valuable work done by DST in the field of the non-destructive evaluation techniques for composite structures, and management of radar, infra-red and acoustic signatures of ADF ships, submarines and aircrafts.

The lectures present the best of Australian defence science to a wide audience throughout Australia, highlighting and recognising the achievements of DST research and two of its most eminent scientists having both been recipients of the Minister’s Award for Defence Science.

Lectures will be held in Adelaide, Melbourne, Canberra, Sydney, Brisbane and Perth in October 2016. To register and find out more please click the locations in the below schedule: