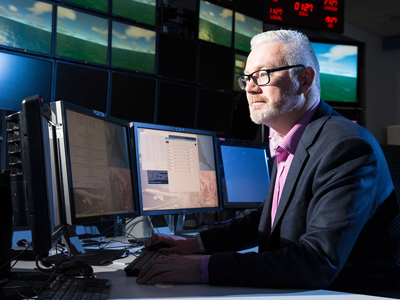 Exercise Black Skies is an opportunity for RAAF personnel to work with the Defence Science and Technology Group (DST) and prepare for Exercise Pitch Black, a live flying mission training exercise, which took place in the Northern Territory in August this year.

The Black Skies series began in 2008 as a result of a request from RAAF Headquarters to look at these kinds of activities and capabilities to help maximise learning benefits. The results have been exceptional, with participants emphasising the value of the activity for their training.

“Black Skies enabled us to accelerate the preparedness of the team allocated to Exercise Pitch Black 2016,” said one participant.

“The team’s performance increased dramatically over the four days [of Black Skies] due to robust scenarios, realistic replication and effective debriefing tools.”

“At the end of Exercise Black Skies, the crews are performing at a level that would be typical for week two or three of Exercise Pitch Black,” another participant explained.

“This was my first Black Skies and I wish I’d been involved in more of them.”

“The participants get to rehearse for Pitch Black – which means they get to make better use of that valuable live flying time,” Best explains.

“They have the opportunity to use the simulator to iron out a few of the bugs in their plans and team coordination processes and to ensure their live training is as effective and efficient as possible.

“In the long term, we also have the chance to ask research questions about the effectiveness of the tools and methods of collective training.

“We are helping RAAF so that when they invest in capability to do training for teams and teams-of-teams in the simulator - the training is as effective as it can possibly be.”

Over the past eight years DST has been monitoring the performance improvements that have resulted from this simulated exercise.

“One of the things we have done is follow the operators from Black Skies out to the live exercise and looked at their performance,” says Best.

“What we have been able to show is that there are performance improvements during the simulation exercise but we’ve also been able to demonstrate that when the RAAF participants get to the live exercise they are performing at a higher level.”

“It is a really great pay-off and it has helped to make the case for further investment in this kind of capability.”

To complement the ongoing success of the exercise, this year’s Black Skies also represented a significant milestone for DST researchers, as it was the first time the exercise was conducted outside the DST Melbourne research laboratories.

The week-long activity took place within a new facility, established with the assistance of DST at RAAF Base Williamtown under an RAAF project known as the Joint Air Warfare Battle Laboratory (JAWBL).

Defence Engineer Brad Macpherson is the DST lead for the JAWBL project and says that the new facility is a result of the relationship DST and RAAF have built through these ongoing successful exercises and experiments, such as Black Skies.

“Over the years RAAF personnel have been coming to the DST Melbourne facility to experience different simulation training activities,” Macpherson explains.

“JABWL is a result of the success of these exercises, particularly Black Skies and other events such as Coalition Virtual Flag - an international mission training exercise, where RAAF have seen the advantages of the simulation capabilities.

“They have observed these new tools and what they can do for their training and now the new facility will allow them to experiment and train, over the next few years and learn how best they can incorporate this capability into their day-to-day regime.”

The new facility is set to host two or three major training events each year, where DST researchers will assist to collect data and measure the effectiveness of the training activities.

“We will be collecting this data over the next five years - with the end goal, a permanent facility such as a joint air warfare training centre – that will bring simulation training technology into their (RAAF) day-to-day business,” Macpherson concludes.