An exciting new take on back seat driving 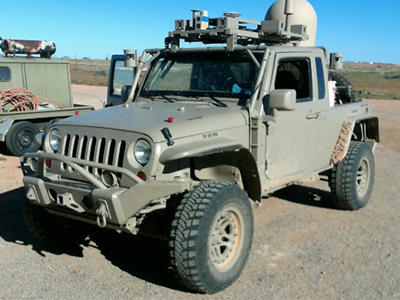 A modified Jeep fitted with a DST Satellite-On-The-Move (SOTM) unit (the dome on the rear tray).

Defence researchers, led by Brian Reid, have joined forces with scientists from the US Army Tank Automotive Research & Development Engineering Centre to demonstrate the semi-autonomous and tele-operation of two modified Jeeps around Woomera.

The Jeep ‘drivers’ - sitting in an office 16,000 kilometres away in Detroit - could see what the vehicle was seeing and using a DST-initiated satellite link could send control messages to the vehicles to turn the steering wheels and depress accelerators and brakes.

The idea is that if an autonomous vehicle runs into trouble, and has to shut down, stop or reset, or malfunctions in any way, it can be tele-operated to complete its mission. Naturally, if this can be done over a satellite link – the utility and flexibility is greatly increased.

“The collaboration on this project has a two-fold purpose,” DST Project Manager from Jacobs Australia, Alan Ross says.

“The first part is really about the contested environment, determining how an autonomous vehicle could be defeated using electronic warfare,”

“Secondly, we will see how we can harden these autonomous vehicles against electronic attack,”

“Another benefit is further developing existing autonomous capability so that the vehicles can better think and do what they need to do. This knowledge will support Australia’s future vehicle acquisitions.”

The Woomera trial was 12 months in the making and is the first of three trials. It went according to plan, successfully demonstrating the ability to control the vehicles via a DST initiated satellite link to the US. The DST team had previously controlled the vehicles locally at Woomera but not over a satellite link.

The second trial, to take place in 2017, aims to defeat the remotely controlled vehicles using electronic warfare techniques. The team will then use these results to harden the vehicle. The final trial, scheduled for 2019 will test the effectiveness of the hardening.

“Somewhere in the future the Army may have a requirement to look at vehicles with varying degrees of autonomous capability,” Ross explains.

“Before we get to that stage we need to look at how, as a country we are going to use that capacity and how much we will be involved in developing it. This project is a first step in that direction.”

Ross stresses that this research is in its early days and that there is much work ahead.

“The underlying tenet of this autonomy is that it’s got to be trusted. To be autonomous we’ve got to trust what it’s going to be doing.” Ross concludes.