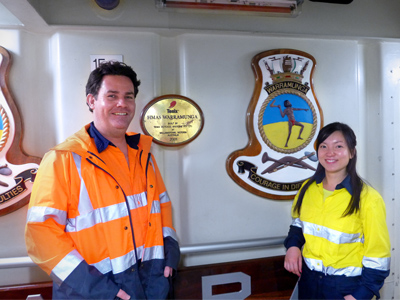 Key to the Royal Australian Navy’s (RAN) warfighting capability is how well its ships survive. That might sound obvious, but there still remain numerous scientific and practical challenges to understanding the behaviour of damaged ships.

A team from the Defence Science and Technology Group (DST) is developing an innovative modelling and simulation solution called the Integrated Ship Survivability Assessment Capability (ISSAC) to understand the issues.

Defence Researcher Anthony Woolley says the concept of survivability for a modern naval platform is a ‘whole-of-ship’ combination of susceptibility, vulnerability and recoverability, referred to as ‘Platform Integrated Survivability’.

“It’s the temporal accumulation of effects upon the platform, and the consequences of those effects,” Woolley explains.

“In other words, how things unfold after an initial damage situation, for example a torpedo hit or a fire in the engine room.”

There are many commercial tools available that can be considered as providing analysis solutions to some, or all, aspects of survivability. However, none of these tools provide an integrated solution that considers the temporal relationships between susceptibility, vulnerability and recoverability.

The ISSAC tool will do that, but will only be as good as one’s understanding of damage control operations. To get this fidelity, field observations and analysis techniques are critical.

“Naval damage control is a complex social-technical system, and we approached it as a system when looking at potential analysis approaches,” says Liu.

“Learning lessons from others, a holistic approach is a better way to go, so we proposed a novel integration of two complementary techniques.”

As field observers, Liu and Woolley were able to witness a series of RAN Damage Control Exercises onboard HMAS Warramunga. This gave them opportunityto utilise one of their proposed approaches to complete a more complex analysis task.

Reading doctrine and training manuals gave Liu and Woolley an understanding of what might theoretically occur, but only when they saw it in practice did they realise the complex, chaotic nature of the situation.

“The conditions to which the crew are exposed  are stressful, cramped and noisy. Temperatures can get quite warm, especially when machinery is crash stopped, and the need to remain hydrated, nourished and rested was evident,” says Woolley.

“These were training exercises but they had to be treated as the real thing – crew were saturated with sweat, drenched from head to foot.”

“Once we have validated the models we will commence implementing them as a rule base defining crew behaviour. This will tie in with our work being performed with the Fire Safety Engineering Group at the University of Greenwich in the UK.”

The team’s participation in the exercise resulted in subsequent familiarisation visits to DST laboratories by managers and instructors from the RAN School of Ship Survivability and Safety to discuss future training needs and how DST research might contribute to the delivery of that training.

“We are in the process of testing hardware to commence the development of a virtual reality damage control scenario later this year,” says Woolley.

“This will assist RAN instructors with training new recruits; and it will also assist the team understand navy damage control operations and analyse behaviour.”