Toughening up batteries from the inside out 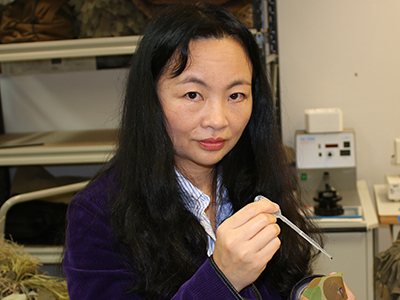 Battery power forms an essential energy source for many kinds of military electronic devices, particularly so for those used by front-line soldiers.

The conventional lithium ion batteries commonly used by soldiers contain organic carbonate liquid electrolytes such as ethylene carbonate, propylene carbonate and dimethyl carbonate. While these have excellent conductive properties at a wide range of temperatures, they are also very flammable. If an impact strong enough to cause deformation is sustained, this can trigger a short circuit heat-evolving reaction that may initiate combustion, possibly explosively.

Previous approaches to enhancing battery safety have involved toughening the battery case, which adds to the battery's weight and volume. The approach adopted instead by DST researcher, Jie Ding, was to create a new type of electrolyte that hardens when subjected to pressure.

The plusses of non-Newtonian fluids

Ding's work grew out of research she and colleagues had been doing at DST to develop body armour using a liquid known as a non-Newtonian shear thickening fluid. This research was assisted by a Defence Science Fellowship awarded to her in 2012.

The crucial material property being investigated was the way that the viscosity of a liquid – its apparent solidity – changes when a force is applied.

Newtonian fluids, which include water, organic solvents and honey, exhibit a viscosity that remains constant regardless of any external stress placed on it. Their viscosities are dependent only on temperature. For non-Newtonian fluids, however, their viscosity dramatically increases or decreases with increasing shear rates – a shear rate being the rate of change in flow velocity from one layer of a fluid to the next.

The aim of the DST work was to develop body armour that provided complete ballistic and blast protection through use of a non-Newtonian shear thickening fluid armour, thereby improving the level of protection, degree of flexibility and comfort. The results so far have shown great promise.

Ding later saw the possibility of using this same non-Newtonian fluid for electrical energy storage, thereby reducing the load carried by soldiers as well. She began her quest for a smart multifunctional fluid with an investigation of the various kinds of electrolytes available and their properties.

Electrolytes can be solid or liquid in form, and are made from a variety of compounds that readily separate into ions having the ability to freely move. This property enables the transfer of electrical charge inside a battery between the positive and negative poles, with different chemical reactions of reversible kinds occurring at each pole during the processes of charging and current drawdown.

The electrolytes for lithium-ion batteries known to be most conductive are the organic carbonates, which have the drawback of being flammable. A range of other electrolytes, including some in solid form, pose no fire threat but have poorer conductivity, meaning that such a battery will provide much less power at a high current drain compared to one with an organic carbonate electrolyte.

Ding's breakthrough involved modifying a commonly used and commercially available organic carbonate liquid electrolyte for lithium-ion batteries by introducing a compound of viscosity enhancing nanoparticles called fumed silica. Due to the repulsive action of inter-particle forces, these nanoparticles push each other apart and disperse throughout the electrolyte, flowing readily when the electrolyte is in liquid form. This, advantageously, also enhances the electrolyte's conductivity.

The experimentation and results

Ding's experimental method involved the preparation of electrolytes containing different amounts of fumed silica. Testing was then carried out on batteries made with these electrolytes.

To test the effects of physical impact on its electrical performance, the electrolyte was put through 47 charge-discharge cycles and then subjected to an impact, which the electrolyte recovered from, delivering pre-impact performance levels.

The battery's mechanical integrity was also investigated for resistance to crushing through tests specially designed to mimic crushing conditions. Batteries without the silica additive succumbed at a force of 0.426 joules, whereas the batteries with electrolytes containing higher levels of additive survived an impact of 0.568 joules – considered to be an excellent level of resistance.

The ability to produce electrolytes with the fumed silica additive appears quite straightforward. According to Ding, "The fabrication method is simple and easily scalable and can be applied to the production of commercial lithium ion batteries without generating significant additional costs."

A wealth of benefits and possibilities

In addition to improving the comfort and safety of equipment for frontline soldiers, Ding's discovery offers significant benefits for military transport operations by reducing the weight and size of battery casings required. It will similarly offer major improvements in the energy efficiencies achievable by electric and hybrid electric cars, which currently need very robust battery casings for safe use.

Ding's research has also involved the study of electrolytes, known as magnetorheological fluids, which change from liquid to solid state when a magnetic field is applied. This may provide another means of producing much more durable batteries.

Her achievements have been publicised in a number of scientific papers including two presented in the Nature Scientific Reports journal, one on non-Newtonian electrolytes and the other on magnetorheological electrolytes.