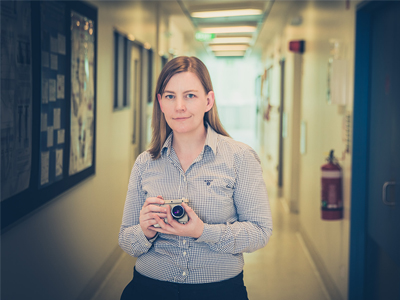 Tania Holmes with one of the high-tech cameras used to capture explosive action.

“A lot can happen in just milliseconds,” she tells the audience.

“Time hides things. That sound you heard was only 2 milliseconds in duration, but critical events were unfolding over that time.”

“During a landmine event, whether a person lives, dies or is injured is mostly determined within the first 2 to 20 milliseconds – roughly the same time as the balloon pop.”

It’s a startling and effective way of explaining the importance of capturing the high-speed events and then slowing them down for analysis.

“By filming at high-speed we can get within that timeframe and watch those events unfold,” Holmes explains.

“But normal video has its limitations – it shows us what happened in one plane. To witness the event in multiple planes we need to film it in multiple dimensions.”

Using high-speed cameras in a 3D array, Holmes is able to track and measure moving objects. This allows a greater understanding of fast-moving events, giving Defence researchers the ability to determine trajectories, velocities and acceleration.

“It tells us what happens, where it happens and when,” says Holmes who has an Applied Science degree in Photography.

“These techniques have allowed us to target research efforts where they will have substantial payoffs.”

Holmes cites the example of an anti-vehicular landmine test for which the team used a combination of internal and external high-speed imaging in conjunction with frangible leg surrogates (FLSs). The FLS leg models have similar properties to the flesh and bone structure of real legs.

“After analysing the footage we were able to understand and target the key mechanisms that led to leg injuries,” Holmes explains.

“After mitigation, medical examination of the leg models predicted that after reconstructive surgery an occupant would be able to walk again in six months. That’s a significant improvement, and the payoff from high-speed imaging.”

The High Speed 3D Imaging System that the Defence Science and Technology (DST) team has developed, in close collaboration with QinetiQ, is believed to be the only one of its type in the world.

After the blast event, image data can be cross-referenced with data from other sources such as the anthropomorphic test devices (ATDs, also known as crash-test dummies) to get a better overall understanding of the event. The ATD data may record a force exerted on a spot at a certain time; the images show the team what actually happened at that time.