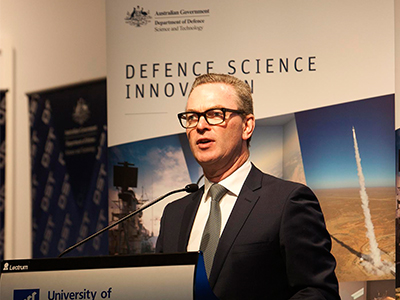 The Hon Christopher Pyne MP at the Next Generation Technologies Fund launch.

"As our enemies devise new ways to attack, our Defence Force must have advanced ways to respond and overcome new threats.

The Australian Government's $730 million Next Generation Technologies Fund is designed to provide the creative solutions Defence needs and at the same time benefiting Australian industry. This is the first time ever any Australian Government has used defence dollars to drive innovation in this way.

"This is a ten year strategic research and development program that will deliver game-changing capabilities for the Australian Defence Force (ADF) of the future," Minister Pyne said.

This fund will draw on the collective scientific expertise of our nation across both industry and university sectors, to give the ADF a winning edge with advanced technologies."

Minister Pyne said to kick off the program the Government would invest $16.8 million by June 2017.

"The first program as part of the fund will be Grand Challenges, where Defence puts forward a problem with no easy solutions and asks Australians to come up with an answer.

"These challenges will require joint, multi-disciplinary research across organisations to resolve.

"The first such challenge, which will soon be open to proposals, is to Counter Improvised Threats, which are constantly evolving and confronting our troops," he said.

Improvised Threats are threats devised and deployed in ways other than in conventional military action. These aren't just explosive devices; they can come in many different forms such as chemical and biological hazards.

Defence is taking on board the risk of failure and in doing so encouraging innovation to solve critical problems.

"These are only a few of several new initiatives to be developed," he said.

"There are a range of opportunities for universities and companies to contribute innovative technology solutions to defeat future threats, many of which are not even on the radar today.

"The Government is determined to make the most of the investment in the Next Generation Technologies Fund and ensure that industry and academia are actively engaged in developing unbeatable capabilities for Australia's future defence force," Minister Pyne said.

The nine technology areas included in the research fund are:

For more information, refer to the Next Generation Technologies Fund fact sheet.