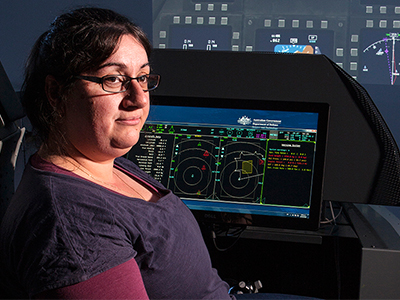 Defence researcher Angela Consoli is leading the development of a Future Integrated Mission System for the Defence Science and Technology Group (DST).

The future military combat landscape is complex, contested, unpredictable and rapidly changing. Adaptable mission and combat systems are needed in order to draw on the vast amount of information, make sense of it and take intelligent decisions. The system is DST’s tactical mission system that helps explore what future technologies will be needed.

“It allows us to examine ways to improve tactical interoperability and integration,” Consoli says.

“We are also developing novel techniques that can use the shared information to enhance both tactical information assessment and decision superiority.

“We are answering the question of how to improve the information quality and start embedding more trust within a networked group of platforms.”

Platforms such as Wedgetail and the F-35A Joint Strike Fighter have mission systems. They will have some similar components but with varying algorithms and technologies depending on the platform’s role.

In complex joint tactical environments, with multiple platforms and mission systems talking to one another, the technologies developed by Consoli’s team will be supporting the information flows that will help our military personnel make the best decisions.

“The aim is to create mission systems that have the ability to perceive, comprehend and project within the actual environment and thus become more autonomous. Humans are very good at it, machines aren’t,” Consoli explains.

According to Consoli, the most important capability of future mission and combat systems will be to make decisions about unconventional threats.

“One way to do that is to implement cognitive architectures that can draw on knowledge to help identify behaviours,” explains Consoli.

“Humans are very good at picking up ambiguities – if something doesn’t look right we will constantly observe it to see what’s going on. That’s the basis of situational understanding and we need to implement that in mission systems.”

Once each machine is thinking, the next challenge is to share that information with other networked participants to create a collective situational understanding. Then, as an element generates better information, that information is shared and processed to expand each platform’s mental model to better understand threats.

“Humans will always be required but we are getting to the stage where there is too much information in the battlespace for humans to assess,” says Consoli.

“We need computer systems working in unison with us, and having humans on the loop (rather than in the loop) called into the loop when needed.

“This is about enhancing the assessment and decision-making components to give a pilot, for example, the best chance of making a good decision before pressing the fire button.”

At the moment, the Future Integrated Mission System is used for laboratory demonstrations but the hope in the medium term is to install it on an unmanned vehicle system of some sort, to carry out real world testing.