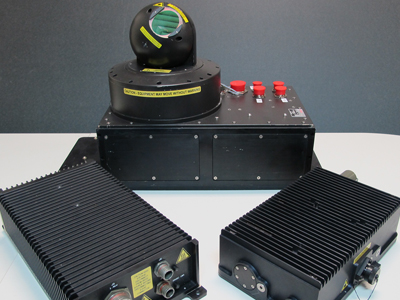 Example of previous generation of mid-infrared laser technology (F-MURLIN) that has been successfully transitioned to industry by DST.

Heat seeking missiles and electro-optic sensors remain a threat to defence platforms, especially to ‘stealth’ platforms that are only stealthy in certain portions of the radio frequency spectrum.

Currently deployed DIRCM systems use bulk crystalline solid-state lasers to produce the laser radiation required to defeat thermal heat seeker sensors on missile threats. Such lasers are sensitive to vibration and as a result are difficult to engineer and expensive to ruggedize for integration onto a defence platform. Despite these challenges, DST has successfully developed and transitioned several generations of this laser technology to industry.

The Laser Technology Group at DST has continued its research in the development of lasers for DIRCM applications. The DST-proposed new generation fibre laser technology replaces a large fraction of the solid-state laser with a monolithic fibre laser amplifier. Fibre lasers are far less sensitive to vibration and, as a result, are cheaper and easier to manufacture.

“In addition, fibre-based systems are less sensitive to vibration and mechanical deformations offering superior performance and cost savings when integrated on Defence platforms.”