Collaborating with the US to protect our soldiers 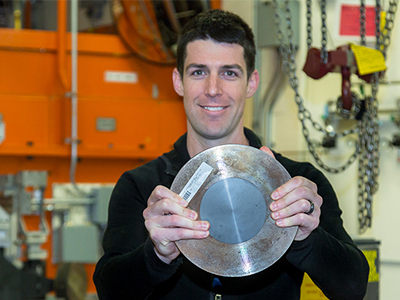 Shannon Ryan is holding one of the twelve ceramic samples tested at the Oak Ridge National Laboratory's beam line for residual stress.

Defence researcher Shannon Ryan recently travelled to the Oak Ridge National Laboratory in the US, to conduct experiments on light-weight ceramics that might be used to replace the traditional heavy metal military vehicle armour.

The work, which involved firing a neutron beam at the ceramic armour, is part of a collaborative program with the US Army Research Laboratory (ARL).

“My main project during my posting was looking at the development of an integrated armour that could defeat a range of different threat types,” Ryan explains.

As part of the ARL Science for Lethality and Protection campaign, scientists experiment with solutions for protecting soldiers against shaped charge warheads, kinetic energy projectiles and explosively formed projectiles.

Ryan was helping develop multi-role armour for future land vehicles. Multi-role armour is effective against different types of threats, as opposed to the traditional layered armour in which each layer is optimised to defeat a particular threat.

This multi-role approach is particularly challenging as the armour mechanisms used to defeat the different threat types vary greatly.

The goal of the research was to look at synergies between technologies that would enable an integrated armour to be developed and would be a lighter weight solution against a wide range of threat types.

“Working in cooperation with the Multi-Threat Armor Branch, we were able to significantly improve the performance of some candidate armours against kinetic energy penetrators,” Ryan says.

The US test facilities have a massive materials stockpile, in-house machining, welding, fabrication, material characterisation and allow for testing to be fast tracked.

“Facilities like these mean you can design a test program, have everything prepared and tested within a matter of days or weeks (if necessary),” Ryan explains.

In the most recent tests at Oak Ridge, the team investigated the impact of applied stress on ceramic targets to correlate with ballistic performance for vehicular armour.

“We were seeking to understand how pre-applied stress impacts the material’s ballistic performance, to validate our models and predictive tools,” says Ryan.

To apply the right amount of stress in the ceramic, the users confined the ceramic samples with a steel ring and measured the strain distributed through the ceramic target using neutron mapping technology.

Neutrons offer a better method to non-destructively measure strain distribution on the ceramic and they retain sufficient energy to penetrate the surface of dense materials like ceramics.

The next phase of the research is a series of ballistic tests on the compressed ceramic material to determine if the applied stress results in improved performance.

Australia and the US have an agreement on sharing certain technologies and an important aspect of Ryan’s posting was the development of relationships with the ARL team.

He returned from the US with plans for several multi-year projects, which will provide some level of burden sharing, and also use the unique capabilities of the US labs.

Ryan’s work in multi-role armour, which will be critical in DST’s work supporting future Army land vehicles, was rapidly advanced by his posting.

“I’ve generated enough test data to keep me busy with analysis and report writing for probably the next five years!”