Improving visual performance for the warfighter 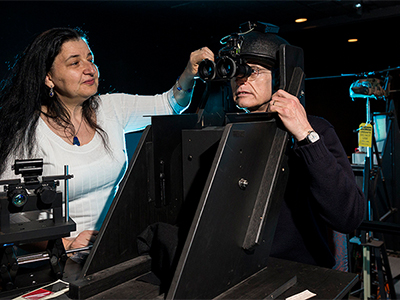 Maria Gavrilescu and Peter Gibbs prepare to conduct an experiment on visual performance with a night vision device used in Army aviation.

The Night Vision Laboratory at Defence Science and Technology (DST) Group provides researchers with a controlled environment to assess night vision technology that is either in service, or is being considered for use by the ADF.

The lab uses a lighting system designed to replicate the night environment in which the night vision devices are designed to work.

“We designed and calibrated the lights so that they replicate the radiance levels a device would experience during different phases of the moon.

“Assessments typically look at both the device characteristics and the system level performance.

“The performance of the human operator is also taken into consideration, which means various psychophysical assessments of people’s visual performance when looking through the devices.”

Assisting the Army to see in the dark

Gavrilescu’s colleague Dr Peter Gibbs says the laboratory has recently been used to assist the Army School of Aviation, which had an issue with their training aircraft, and needed to fly in civilian airspace at night with pilots who are using night vision devices (NVDs).

“The Army aircraft, which would normally be flying with covert lighting designed to work with NVDs, are required to use navigation lights which non-defence pilots can see,” explains Gibbs.

“We are helping Army assess lights suitable for civilian airspace that are not disruptive to the NVDs being used by the Army pilots.”

“We are trying to understand the source of that fatigue and whether we can reduce it because any binocular device including virtual reality devices will have similar issues,” says Gavrilescu.

“Imagine reading a book up very close, or through someone else’s glasses. You can still read it but if you try reading it for three hours straight you get eye-strain, headaches and possibly nausea.

“Night vision technologies can force your eyes to make unnatural movements. If pilots do this for a sustained period of time they can experience symptoms that may affect safety.”

The DST laboratory allows Gibbs and Gavrilescu to perform tasks with known levels of binocular misalignment (which is expected to be one of the sources of visual fatigue). The aim is to define good objective measures of visual fatigue.

Pending the success of these tests, further experiments will be planned to take place in one of Army’s training simulators.