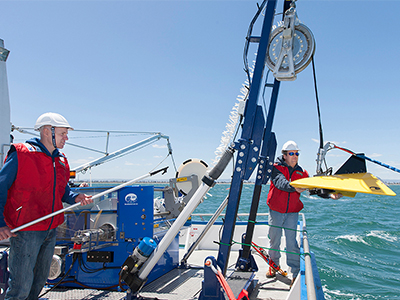 The Defence Science and Technology (DST) Group has recently acquired a new Towed Acoustic Projector System (TAPS) that will significantly improve how the organisation conducts its underwater acoustic research.

For many years DST has been using it’s much larger 10 tonne sonar research projector system (SRP) to conduct experiments that require the transmission of sound waves underwater for sonar research.

Defence researcher Phil Jackson says the new TAPS is significantly smaller and lighter than the SRP - hence cheaper and easier to use.

“Being so much smaller and lighter we can fit TAPS on a variety of smaller vessels, increasing our flexibility when it comes to trials requiring an underwater acoustic source,” explains Jackson.

“At less than 900 kilograms, the new TAPS winch, launch and recovery system and associated equipment can be easily moved with a forklift, transported in a standard trailer and rapidly installed on a vessel.”

Both the TAPS and SRP systems require the acoustic transducers to be towed by a cable through the water as they transmit acoustic signals representative of different maritime objects such as submarines, torpedos and boats.

While the SRP tow body incorporates the entire frequency range (50 Hz to 10 kHz) in its single 640kg unit, TAPS has five interchangeable 20 kg fibreglass “V-wing” tow-bodies, each fitted with an acoustic transducer that covers a smaller frequency range.

“We found in practice that very rarely do we need the entire frequency range at once, normally just a subset,” says Jackson.

“So we made the design compromise of having to swap tow-bodies for a lighter system that is logistically much easier to manage.

“It only takes 15 minutes to reel a tow-body in and swap it, not an onerous requirement.”

Jackson was given a short window to procure TAPS, with nothing like it available off the shelf he had to quickly compile a tender. The successful tenderer was Canadian subsea detection specialists GeoSpectrum Technologies.

With advice and assistance from his Canadian defence science counterparts from Defence Research and Development Canada the TAPS procurement was completed smoothly and on time.

Jackson has already begun training other DST staff to set up and use TAPS.

“I think this will really assist with our research program. It is much easier, faster and cheaper to get TAPS into the water for research, so we’re excited about the opportunities to use it on trials in the future,” he says.